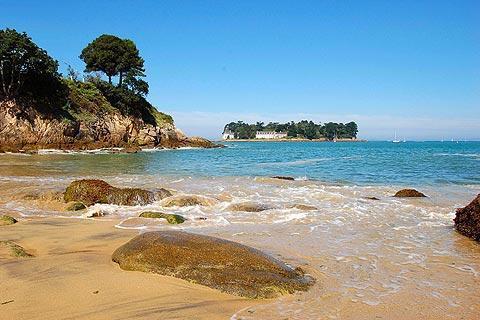 With an extensive and often very scenic coastline and numerous small fishing villages and coastal islands to explore as well as historic towns and villages it is easy to see why Finistere is so popular with visitors. It is a little harder to reach than some parts of Brittany, but well worth the effort! 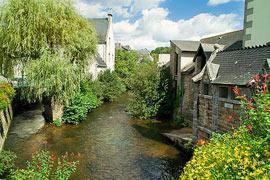 Finistere has more than 1000 kilometres of coastline, and there is a wide range of beaches and coastal scenery, towns and villages to enjoy as well as the chance to visit some of the popular islands just off the mainland.

Although the coast is the big attraction remember to also allow time to venture inland to explore the countryside!

Because of the size of Finistere and the slow roads most visits will concentrate on just a small part of the department to give you have plenty of time to explore, so to help you plan your travel we have divided our guides into three separate regions, with a selection of the highlights to explore in each.

The northern part of Finistere is very popular, in particular the area around Lannion (just outside Finistère) and on the coast near Saint-Pol-de-Léon. Entering Finistere from the north-east, the first resort you reach is the traditional village (and the beaches) of Locquirec, with the historic town of Guerlesquin about 20 kilometres inland and listed as a 'small city of character', and the 'enchanted forest' at Huelgoat a little further.

Nearby you can visit Morlaix with its large medieval centre having a good number of half-timbered houses and an active port, and if you visit Plouezoc'h you can also see the imposing Chateau de Taurea just off the coast. Among the prehistoric sites in Finistere you can visit the Cairn de Barnenez at Plouezoch.

Continue west to the cathedral town of Saint-Pol-de-Léon which has much to admire, from the tallest belfry in Brittany to the nearby beaches. Roscoff has a very picturesque historic centre around the Church Notre-Dame-de-Kroaz-Batz and its lantern tower: more than just a ferry port, Roscoff has interesting historical monuments and impressive botanic gardens.

You can take a boat trip from here to visit the Ile-de-Batz, a very popular island with beaches and gardens. From here you can explore the coast to the west or travel south to the lively town at Landerneau which has a rare 16th century bridge lined with ancient buildings.

The highly decorated churches at Guimiliau and Saint-Thegonnec are also very worth visiting, along with others that you will come across during your travels through Finistere. See Enclos Paroissiaux churches of Finistere for details. Another popular destination in the north of Finistere is the fortified renaissance castle at Kerjean.

The west of Finistère

The west is the most wild region of Finistere, where you will discover spectacular coastal scenery and villages that have escaped the tourist crowds. Starting in the northern part of this area you can visit Le Conquet, a village which is also the departure port for boats to the small islands off the far western tip of the department - Ile Molene and Ile Ouessant.

A substantial part of western Finistere is within the Armorique Regional Park which has diverse landscapes, from rocky coastline to unspoiled countryside. Places within the boundaries of the park include the small village of Le Faou, a picturesque harbour village with lots of half-timbered houses that is listed among the 'most beautiful villages' in France.

The western part of the park, on the Crozon peninsula, has exceptional views from some of the headlands along the coast as well as beautiful coastline and beaches, picturesque villages and towns Highlights include the Pointe de Dinan and the nearby Pointe de Pen-Hir, as well as the scenic fishing village at Camaret at the western tip of the Crozon peninsula and the resort of Morgat which has been attracting visitors to western Brittany for more than 100 years.

To the west of Locronan the town of Pont-Croix merits a visit, as does the impressive boating 'museum' in the harbour at Douarnenez with its rebuilt historical boats, then head to Audierne and the Pointe de Raz, one of just a handful of classified 'Grand Sites of France'.

The Ile-de-Sein is a small island off the western tip of Finistere.

The important town of Quimper is a cathedral town with a very extensive medieval centre to explore: take time to explore the cobbled streets in the heart of the old town.

While Quimper is the best known town in the southern part of Finistere, there are numerous smaller towns and villages of interest, and plenty of lovely beaches to discover. Benodet is one of the most popular resorts here with easy access to good beaches and other highlights include the fishing port of Concarneau and the town of Quimperlé, a very picturesque town clustered around an ancient abbey-church.

South of Quimper visit the quiet port town of Pont l'Abbé which has an attractive harbour then between Quimper and Quimperlé we also recommend a visit to Pont-Aven, a scenic town where you can stroll along the riverside admiring the ancient watermills and visit an impressive art museum.

Islands to visit in this region include Ile Glenan, now a popular diving centre and nature reserve.

Central Finistere: away from the coast

While the coastal regions and islands attract the most visitors, be sure to also venture away from the coast a little and you will discover the central part of the department with quiet traditional villages and the Parc d'Armorique, with its own particular charm and beauty.

Places of interest in the central Parc Armorique region include the Monts d'Arree, with plenty of opportunities to enjoy the wilderness that Brittany can offer, and in the east the deep forest around Huelgoat abounds with myths and legends.

Among other scenic highlights in Finistère, be sure to visit the viewpoint at Menez-Hom for some very impressive views across the countryside and coastline.

Map of Finistere and places nearby

See Brittany seaside, coast and islands for some of the other coastal highlights in Brittany.

See an index of all Finistere communes