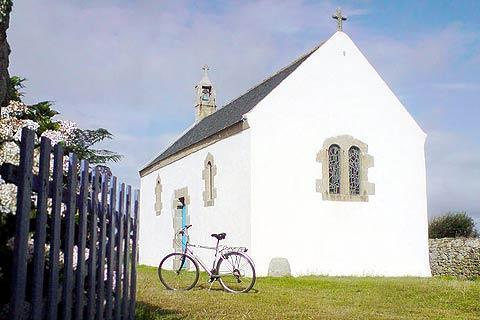 Molene is a small island - or rather part of a group called the Molene Archipelago - off the far western tip of Brittany. Ouessant Island is slightly further west, and is larger than Molene. The islands are the only two inhabited in the group, which is part of the Parc Régional d'Armorique.

The islands are reached by ferry from Le Conquet or Brest. At up to 20km from the French mainland, neither of the islands seem a particularly tempting place to live, but between them they do have a few hundred brave inhabitants.

It is above all the diversity of wildlife and the unusual natural environment that makes the Ouessant and Molene group of islands remarkable - this wind and sea-battered archipelago of islands and islets has been listed as a World Biosphere Reserve for its plant and animal life.

A walk around Molene island - which covers less than one square kilometre, but is the largest in the group, doesn't take long but is well worth doing, both to appreciate the island itself, and for views out across the other islands in the group. It is also possible to take a boat trip around the coast.

There are no cars on the island, electricity is generated on Ile Molene itself, and rainwater is retained for use by the population.

The 'Museum of Drummond Castle' on the island commemorates the efforts of the islanders to help the sinking ship of that name in 1896. There is also an exhibition of the natural history of the Ouessant islands.

Although Molene is small and usually visited as part of a day trip from the mainland it is actually possible to stay on the island where there is a hotel and several holiday rental cottages. You will also find two small restaurants and bars, a post office and a small supermarket. 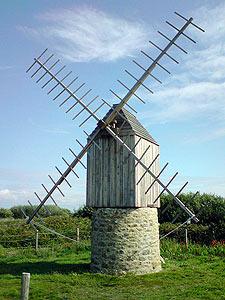 Also rather barren at first glance, Ouessant is substantially larger than Molene, at 8 kilometres by 4 kilometres, and a little further to the west. In fact, heading west from Brittany it is the last French territory - next stop America! The Ile d'Ouessant is more visited than the smaller Ile de Molene.

Visitors come to Ouessant for the feeling of being in the last outpost of France, in a fascinatingly wild environment. There are lots of walks and paths around the island which, remarkably given its location, attracts more than 10,000 visitors each year.

The amazing scenery, rock formations, and constant battle with the sea make it a particularly interesting place to spend some time and (if you come when the weather is nice) walk along the coast. There are also several bike hire shops on Ouessant, which is an ideal way to explore an island of this size, and a bus service between the port on the east of the island and Lampaul on the west.

Note: bikes are not allowed on the coast path itself because Ouessant is a protected environment. You can of course cycle along the roads or tracks to reach the coast and then walk - there are lots of tracks and minor roads near the coast.

The main historical monument on the island is the Church of Saint-Pol Aurélien at Lampaul, the only town of importance on the island, although you can also see various small chapels and lighthouses. There are a few lighthouses to be seen including Stiff Lighthouse, constructed in 1669, and Créac'h Lighthouse, apparently the most powerful in the world and which contains a small museum explaining the construction of lighthouses over the centuries.

There are more facilities on Ouessant than Molene, with a choice of several hotels, campsites and holiday rentals, as well as several restaurants and creperies. The majority of facilities are found in and around Lampaul, except holiday rentals which can be found in most parts of the island.

Note: the island is sometimes referred to using its English lnguage name, Ushant Island. Interesting note: it is the only place in Brittany that has a different name in English and French!

The islands are at the heart of the Natural Marine Park d'Iroise, and scuba diving is popular here.

Map of Ile Molene and Ouessant and places nearby

Visit near Ile Molene and Ouessant with France This Way reviews

Plan your visit to Ile Molene and Ouessant, Finistere