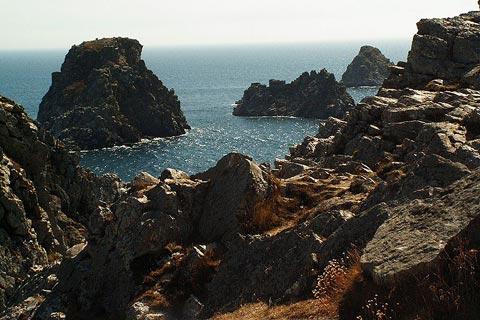 The Regional Parc d'Armorique is found in western Brittany, in the Finistere department of France. The Parc extends as a long thin area from inland Finistere out to the tip of the Crozon peninsula.

It is the diversity of landscapes that makes Armorique so interesting, with attractive rolling countryside and rugged rocky coastline, the attractive Aulne Estuary, several picturesque lakes and the Monts d'Arree (Brittany's highest mountains), among the sights of interest.

There are a multitude of small towns and villages set amongst the attractive countryside, and numerous museums within the parc boundaries that explain the rich heritage and nature of the park, explain traditional arts and crafts and explore traditional buildings.

Crozon peninsula and the south-west 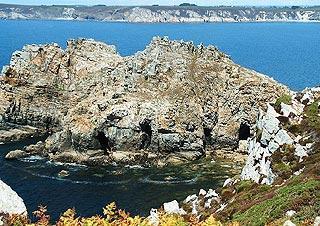 The Crozon peninsula to the south-west of Armorique Parc contains much of the coastline and several interesting towns and villages. Start perhaps with a visit to the village of Le Faou to the north-east of the peninsula, classed as one of the 'most beautiful villages of France'.

The scenery is ever more dramatic as you move westwards, culminating with the view at Pointe de Pen-Hir at the most westerly point of the peninsula.

it is perhaps the coastline scenery of the Crozon peninsula that is the highlight of the parc - craggy and cliffy, with quiet beaches (attention required - many beaches on the exposed coastline are not safe for swimming) found between the dramatic rock formations that jut out into the sea.

Crozon itself, Camaret (with the Chateau de Vauban out at the end of the quay) and Morgat are often used as bases by those exploring the region. Chateaulin, at the southern end of the Aulne estuary that crosses the parc, merits a detour to see the waterfront area of the town.

Following the Aulne river as it traverses the Armorique parc is also an interesting way to see picturesque countryside. To the north of the peninsula make the trip to Landévennec where the remains of a 10th century abbey are surrounded by some very pretty countryside and lovely views over the Aulne estuary. 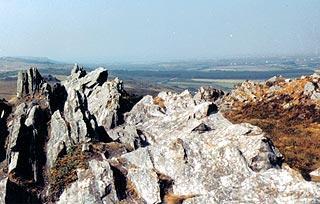 The inland region to the east of the Crozon peninsula, that extends north-east almost to Morlaix, is a quieter area of unspoiled countryside, centred around the Monts d'Arrée, lakes and small towns and villages such as Huelgoat (see the large boulders at the 'chaos granitique du Huelgoat' nearby).

The Monts d'Arrée hardly count as mountains, only reaching about 1000 feet altitude at the highest point, but are rather rocky outposts in lovely gorse and heather sprinkled countryside, and a good place to walk and see the wildlife of this quiet region of Brittany.

Parish Closes: One unusual architectural feature found in this part of Brittany is the so-called 'Parish Closes'. These are churches that are built with the cemetery around the church, surrounded by a stone wall to keep the animals out. These have been constructed in various elaborate fashions, with some particularly impressive gateways set in the walls.

Although there are many of these that you will come across, particularly try to seek out the most well known at Thégonnec, Guimiliau and Lampaul-Guimiliau.

The Molene archipelago and Ouessant Island, to the west of Le Conquet, are also part of the Armorique Regional Park - see Molene and Ouessant.

Map of Armorique Regional Park and places nearby

Visit near Armorique Regional Park with France This Way reviews