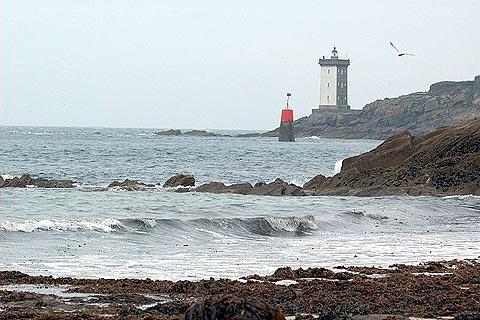 Le Conquet is an attractive fishing village (crabs are the most popular catch here) at the remote western tip of Brittany, in the Finistère department, where it is almost the most western point in mainland France.

Most visitors to the region are here to explore the cliffs and coastline with its rocky outcrops and islands that permeate this part of the coast, that has been less touched by tourism than much of Brittany, and of course for the lovely beaches.

Start your visit to Le Conquet with a stroll around the harbour, to see the active fishing fleet and pleasure boats. The village itself is quiet with a few buildings of historical interest, including the old stone house with a corner tower in the port (called the Maison des Seigneurs) and the 15th century Maison des Anglais.

Le Conquet is rather keen on awards and when we visited it was listed as Pavillon Bleu for its beach; Station Verte because of its green tourism; and Famille Plus because of its appeal to and facilities for families as well as a 2* ville fleurie and recipient of a couple of other local awards and listings! 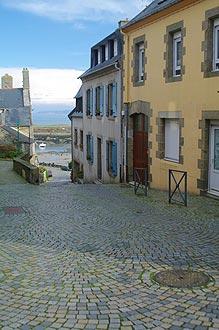 The remainder of the historical centre of the village is largely a huddle of traditional stone houses along the narrow village streets, along with a good selection of art galleries and restaurants - several of them serving very fresh fish from the local fishing fleet.

Two of the closest beaches to Le Conquet are the Plage de Pors Liogan and the Plage de Portez (next to the town centre) and there is also a lovely beach towards Kermorvan called the Plage des Blancs-Sablons, the largest sandy beach in the area, as well as other smaller beaches.

Be wary of the coast along western Finistere and always check before swimming in unsupervised beaches, since strong undercurrents are often present - the tourist office have a leaflet that follows the 'route des plages' which is a good starting point for visiting the beaches in the region.

The main Church of Saint-Croix in Le Conquet was built in the 19th century - the arches in the upper part of the belltower are a common feature in Brittany churches and are not there for decoraion but to allow the wind to pass through without causing damage to the structure.

The lighthouse at the end of the Kermorvan peninsula, built in the middle of the 19th century and still warning ships away from the hazardous coastal rocks, is another popular local landmark - although the lighthouse itself is not open to the public the coastal path here is very scenic, if sometimes a little bracing. 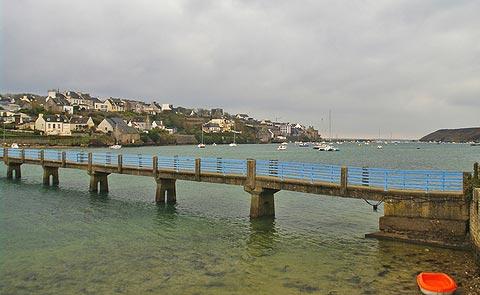 Also on Kermorvan is a military fortification called the Fort de l'Îlett, again best visited for the surrounding coastline.

The port in Le Conquet is the departure point for boats to reach the Island of Ouessant and the Ile de Molène.

See also the Chapel of Saint-Michel at Lochrist.

Map of Le Conquet and places nearby

Visit near Le Conquet with France This Way reviews

Regular market(s) are held in Le Conquet each Tuesday. (Markets are held in the morning unless stated.)

The French version of this page is at Le Conquet (Francais)