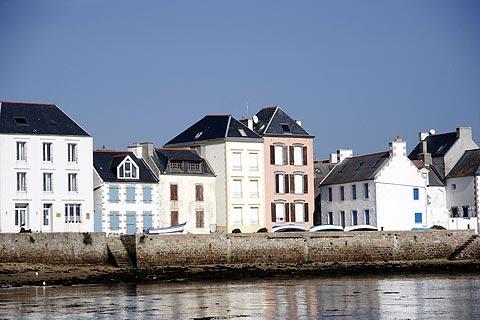 Ile-de-Sein is a small island and village a few kilometres west of the Pointe-du-Raz at the western limit of the Finistere department of Brittany. The island is only about 2km long, and covers little more than 50 hectares.

Tourism is now the main activity on the island, which only has a hundred residents but receives many thousands of visitors each year. The main highlight on the island is the village and port area, which is classified as one of the 'most beautiful villages of France' and is a picturesque village of small, typically whitewashed houses clustered around the port.

There are two menhirs (standing stones) on the island next to the church, indicating how long the remote island has been inhabited.

A small museum in the town called the 'Abri de Marin' explains the unique lifestyle and challenges of living on the island, both currently and in the past. (You might come across other 'Abri de Marin' in Brittany. These buildings were built in the early 20 th century specifically to give fishermen staying on the islands and in the ports an alternative to spending all their time in the inns, which was creating a problem of alcoholism among the fishermen.)

There are a selection of restaurants and a few other small shops, otherwise facilities are very limited.

Constant exposure to the force of the Atlantic winds means that the low-lying island is an inhospitable place for plants and trees, which can't grow in the extreme conditions. It is this stark environment and the ever present sea that is a large part of the appeal of the Ile-de-Sein so after exploring the village take a walk around the island.

Cars and motor bikes are not allowed on the island, so all movement is on foot, but since the island is small that is no problem - and there's no chance of getting lost!

The main lighthouse to the west of the island is the Phare Saint-Corentin, rebuilt in the 1940's after the earlier lighthouse here was destroyed in the Second World War (you will perhaps already have noticed the second lighthouse on Ile-de-Sein, which is the Phare de Men Brial in the port area).

The remoteness of ile-de-Sein means that the island needs to be self-sufficient, and all the energy and water required need to be produced on the island - in small energy and desalination plants next to the Phare Saint-Corentin.

The port and village are on the more eastern (closer to Brittany) side of the island, with ferries to reach the island leaving from Sainte-Evette near Audierne all year round - the crossing takes about an hour. During July and August a ferry service also operates from Camaret.

Map of Ile-de-Sein and places nearby

Visit near Ile-de-Sein with France This Way reviews

Plan your visit to Ile-de-Sein, Finistere