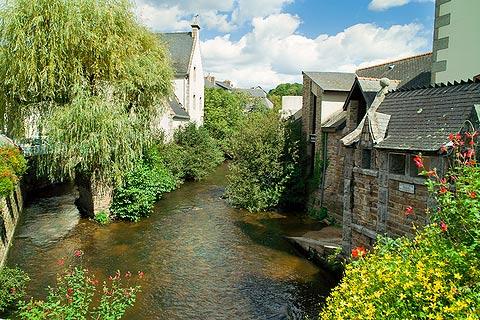 The historical port town of Port-Aven is between Quimper and Quimperlé in south-east Finistere (Brittany region).

For several hundred years Pont-Aven was a quiet port town with an industry based around its watermills and port, then towards the end of the 19th century it also gained a reputation as an art town. A significant number of artists are still attracted here, with the town referred to by the local tourist authorities as a 'city of artists'.

The town is best known for the historic watermills along the banks of the quiet river Aven, and it is these that provide the scenic backdrop for the town - although only four now remain, and it is said that were 14 or 15 here when Pont-Aven was at its most prosperous.

Ask for the guide 'Promenade des Moulins' in the Pont-Aven tourist office for a walk that discovers both the mills that still exist and those that are now in ruins or no longer in existence. 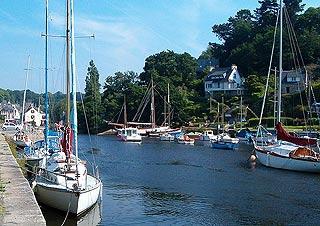 Apart from the mills you will want to stroll around the quiet port overlooked by Breton houses, and to explore the town itself where there are a good number of traditional granite and whitewashed houses. The whole of the centre of Pont-Aven is very pleasant and one of our favourite towns in the region.

Be sure to explore the streets both sides of the main bridge, and to amble down some of the smaller side streets such as Rue des Meunières (to the west of the port) to see the most traditional parts of the village.

There are numerous pizzerias, creperies and more traditional restaurants in Pont-Aven, along with banks, shops and all other commerces necessary if you are staying nearby.

We recommend you visit the Pont-Aven tourist office before exploring because there are several megaliths, chapels and natural highlights nearby that you are likely to not see if you just wander around.

An artistic community had already been established in Pont-Aven for around 20 years, but its fame became assured in 1886 when Gauguin first discovered the town and its picturesque setting, and came here to establish a studio. An interesting way to explore the town is to use the guide from the Tourist Office that follows in the footsteps of these famous artists.

Enthusiasts of Gauguin will also want to visit the small Chapel of Tremalo just outside Pont-Aven to see the wooden cross that inspired Gauguin to paint The Yellow Christ, one of his most famous paintings, and is surprisingly similar to the painting. 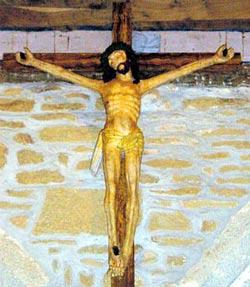 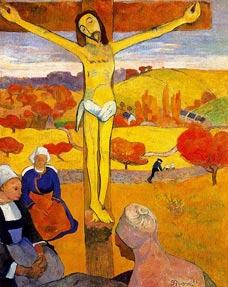 You can see some high quality examples of the 'Pont-Aven art' in the Museum of Fine Arts, which has quite a remarkable collection given the size of the town and is a highlight of a visit.

The area around Pont-Aven is as much of an attraction as the town itself. Of course, there are beaches just a few kilometres from here but the valley around the town is also very picturesque with the river providing a lovely backdrop to the tree covered slopes.

There is a marked trail that follows along the Aven river from the town through the Bois d'Amour that takes about an hour and is the best way to appreciate the natural environment.

Map of Pont-Aven and places nearby

Visit near Pont-Aven with France This Way reviews

Plan your visit to Pont-Aven, Finistere

Regular market(s) are held in Pont-Aven each Tuesday. (Markets are held in the morning unless stated.)

The French version of this page is at Pont-Aven (Francais)