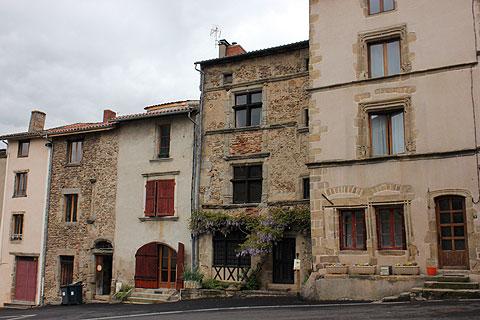 Sauxillanges is in the Puy de Dome department of the Auvergne region of France, on the western edge of the Livradois-Forez natural park and close to Usson which is one of the "most beautiful villages of France".

Seen from the air or on the map from the tourist office it is clear that Sauxillanges is dominated by a large monastery. Sadly this is private and really from the outside you can see very little of it. This means that Sauxillanges whilst pleasant enough, is lacking a highlight. 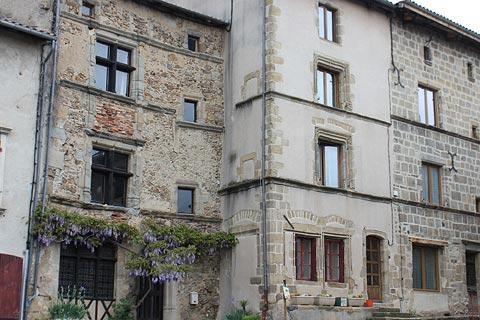 As well as the monastery there is an attractive small chateau on the edge of town opposite Sauxillanges tourist office but this too is private.

Opposite the church on the other side of the road there is a viewpoint over some pretty gardens and towards Ussson in the distance.

The monastery grew up when twelve monks from the Abbey of Cluny came to Sauxillanges. They built a large church dedicated to Saint Peter and Saint Paul. For the villagers they built the church of Notre Dame de l'Assomption. New buildings were added and an important monastery came into being. In the 12th century fortifications were added and Sauxillanges escaped the destruction of the Hundred Years War.

The monastery and surrounding village continued to prosper into the 16th century but then the monastery went into decline. By the time of the Revolution only a dozen monks remained and the buildings were suffering. In 1792 the monastery was sold and the church bells melted down. The church was destroyed and many buildings looted. What was left is now in private ownership. 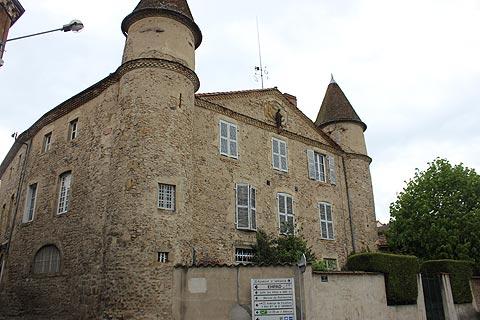 Places to Visit nearby

The "most beautiful villages" of Usson and Montpeyroux are both just a few kilometers from Sauxillanges and have interesting medieval centres to explore.

Sauxillanges is in the Livradois-Forez natural park which has some beautiful countryside. One way of exploring the park is to follow a circular route visiting various villages which have been highlighted as being of particular interest. These are Billom, Thiers, Chateldon, Courpiere, Olliergues, Ambert, Viverols, La Chaise-Dieu and Allegre.

Map of Sauxillanges and places nearby

Visit near Sauxillanges with France This Way reviews

The French version of this page is at Sauxillanges (Francais)