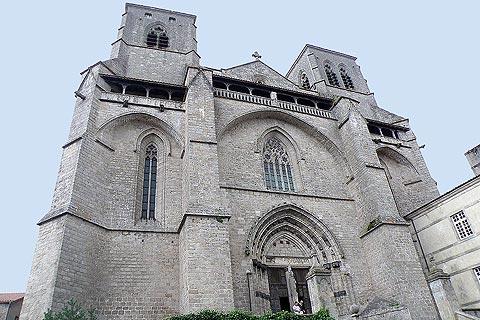 La Chaise-Dieu is situated in the Haute-Loire department of the Auvergne, towards the south of the Livradois-Forez Natural Parc.

Set on a hill in the characteristic gently rolling green landscape of the region, the village is best known for the Abbey Church of La Chaise-Dieu, an important building that dominates the village. As well as the abbey you will want to take a stroll around the historic centre of La Chaise-Dieu, which is small but has some interesting monuments. 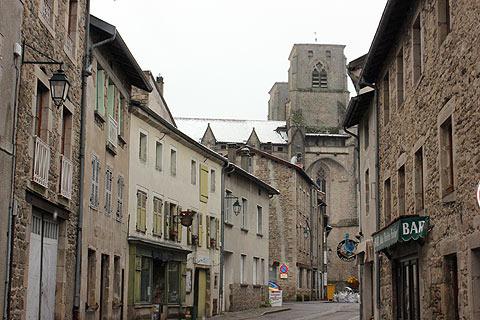 The presence of an abbey here dates from the 11th century when it was founded by Robert de Turlande - canonised as saint-Robert in 1270. The abbey very quickly attracted pilgrims and remained a very important monastery for the region throughout the Middle Ages, only ceasing activity at the time of the French revolution.

The current abbey church was built in the second half of the 14th century, and is a very substantial granite building. The medieval construction can be seen in the gothic style church and the attached cloisters. On the outside of the church the dominant features are the facade with its two towers, and the third tower above the other end of the building.

The cloisters adjoining the church are particularly interesting, with the arcades around the edges enclosed by columns supporting decorative stonework.

Inside the church you can see the extensive (26 metre long) 15th century fresco called the 'Danse Macabre',a fascinating work in three parts showing the rich and influential (such as cardinals), the leaders of the commuunity (such as merchants) and the ordinary people. The 'living' are being welcomed by the dead - the whole fresco representing the idea that we are all equal when it comes to death.

There are also various tapestries around the choir section, and the tomb of Pope Clement VI who trained here as a monk. Above the cloisters, the church treasury also holds some interesting items such as a large tapestry depicting the crucifixion.

Also to see in La Chaise-Dieu

Elsewhere in La Chaise-Dieu the village is focussed around the square in front of the church. There are a sprinkling of traditional buildings to admire around the small medieval centre of the village, several of them historically buildings connected with the abbey complex. The fountain in the centre of the main square dates from the 15th century.

Behind the church is the Cour Lafayette, another square, this one is almost totally surrounded by buildings with access either down the side of the church or through the only remaining stone gateway through the ramparts. The square is dominated by the large square tower of the donjon. The old barns and stables of the abbey have been converted into a concert hall.

A notable curiosity is the 17th century 'Salle de l'Echo' reputed to have the acoustic characteristic that two people can stand in opposite corners of the hall, speak quietly to each other and still be heard perfectly clearly. Useful in the Middle Ages when people with contagious illnesses wanted to confess to the monks, they say!

There is also a museum relating the life of monks in the 12th century, the life of Saint-Robert and the history of the abbey. 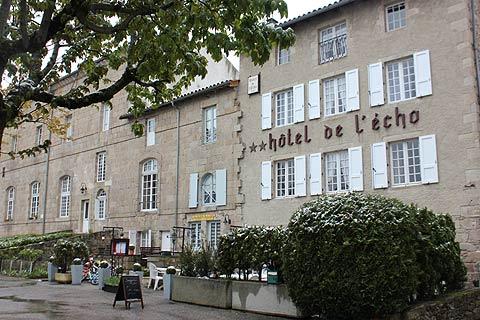 La Chaise Dieu is in the Parc Naturel Regional Livradois-Forez, a beautiful region worth exploring. Twelve villages in the area (including La-Chaise-Dieu) have a particularly interesting history and as they are scattered throughout the park provide a useful focus for visiting the park. These villages are: Allegre, Auzon, Sauxillanges, Billom, Chateldon, Thiers, Coupiere, Olliergues, Ambert and Viverols.

Map of La Chaise-Dieu and places nearby

Visit near La Chaise-Dieu with France This Way reviews

Regular market(s) are held in La Chaise-Dieu each Thursday & Sunday. (Markets are held in the morning unless stated.)