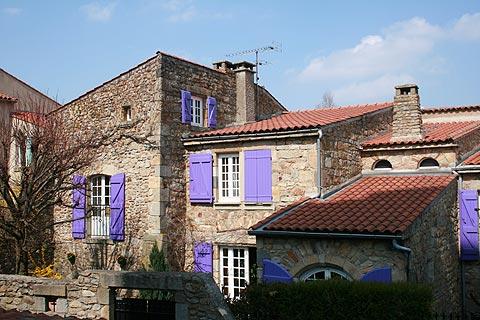 The village of Montpeyroux is 15 kilometrs south of Clermont Ferrand and 15 kilometres north of Issoire, next to the A75 motorway in central France (in the Puy de Dome department of the Massif Central). It is classified among the 'most beautiful villages of France'.

Montpeyroux is a very pleasant place to stop as you hurtle along the motorway towards the south of France - a few minutes exploring the attractive narrow streets and alleys and you forget that you still have a couple more hours journey ahead of you! 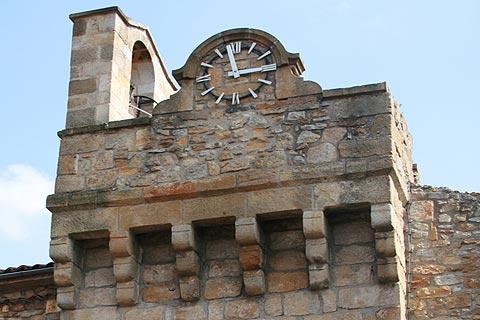 Originally a wine growing region, the area around Montpeyroux suffered greatly from the phylloxéra outbreak in the 19th century which devastated many vineyards in France. More recently, with the enthusiasm and backing of the village since the 1950's, Montpeyroux has had a revival, based largely on tourism.

The village is built from the local white stone after which the village takes its name (Montpeyroux = stony hill / 'mont pierreux') and stands 460 metres above sea level. This raised postion means the village has far-reaching views across the surrounding region.

The centre of the town contains a 13th century fortress tower (donjon), that towers over Montpeyroux village. An attractive 14th century clock gate can also be seen, remaining from the days when the village was surrounded by a fortified wall.

With a maze of small streets to explore, and small gardens to peep into, the village has been largely restored in recent years and is now one of the 'most beautiful villages of France'.

In the 'centre' there are also a few restaurants, art galleries etc and places to sit and quietly pass the time. (I ate in La Vigne restaurant, which is highly recommended)

Note that parking in the village itself is not possible, but there is a large free car park just on the edge of Montpeyroux, just moments away from the vilage itself. 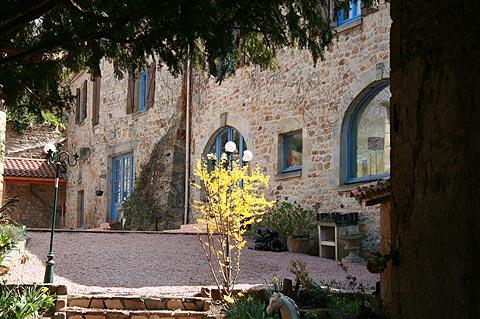 The nearby villages of Saint-Saturnin, Usson and Saint-Floret (among others) are also worth a visit and close to Montpeyroux, and the town of Issoire also has a pleasant town centre.

The 'Grand Site' of Puy-de-Dome is a little west of Clermont-Ferrand.

Map of Montpeyroux and places nearby

Visit near Montpeyroux with France This Way reviews

Plan your visit to Montpeyroux, Puy-de-Dome

The French version of this page is at Montpeyroux (Francais)