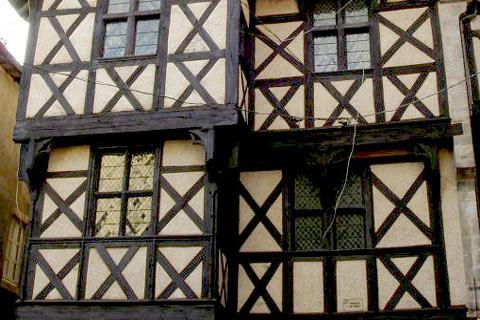 The following is a guest article kindly contributed to France This Way by one of our visitors.

The town of Thiers is located east of Clermont-Ferrand, in the Puy-de-Dome department of the Auvergne. The sombre air of medieval Thiers, still best known as the home of the Sabatier knife, belies its centuries of international fame as the capital of French cutlery manufacturing.

On the edge of the mountains of the Bois Noirs, 800 metres high and beside the ravine of the fast flowing river Durolle that once powered the grinding wheels of the cutlery factories, Thiers looks over the Limagne plain across to the Chaîne des Puys: it is a spectacular view.

The approach up or down the zigzag road to the medieval centre on the hill is a little depressing as this once wealthy, busy and flourishing town with its little cutlery workshops has become rundown: because of the steepness of the streets and the problems of building and rebuilding it has been easier in recent years to build homes, shops and offices at the foot of the hill. 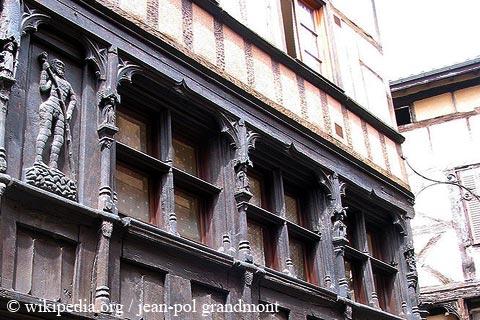 In the medieval centre of Thiers small cutlery, food and clothing shops remain but on the outskirts shops have closed down, their trade taken over by the supermarkets at the bottom of the hill.

However, especially for those interested in medieval architecture or industrial history it is worth persisting until you come to the very remarkable medieval centre. A tour of the narrow streets around Rue du Pirou takes you past magnificent stone doorways, under bridges built between upper floors that connect stone and timber buildings in the local style. Start in Place Chastel where each hour you can see an anvil struck by an automated timekeeper called a Jaquemart.

These buildings, many of which have their original interiors still intact, were constructed in the 14th and 15th Centuries and belonged to wealthy merchants who sent paper and cutlery all over Europe. All this is evidence of the prosperity of Thiers at the time, a prosperity that continued into the 18th century. Even before the war Thiers was still a thriving place.

The Hotel du Pirou, a four storey medieval house in the town centre, is among the most impressive, and you can also see the 15th century wooden carvings on the Maison de l'Homme des Bois. The Hotel de Pirou contains a history museum with an interesting collection of objects from across Europe including statues, tapestries and carved objects.

You can learn more about the local industry in the cutlery museum in Thiers (on the Rue de la Coutellerie) which is very illuminating.

The historic centre of Thiers is now listed as a 'secteur sauvegardé ' to ensure it is protected for the future.

There is much religious history to be explored in Thiers with three main religious buildings:

Perhaps the most dramatic aspect of Thiers, however, is the ‘Valley of the Factories’ where many of the old factories and workshops still stand on the banks of the Durolle. During the high season you can take a guided tour but out of season you can collect a leaflet from Thiers tourist office and follow one of the itineraries that take you down out of the centre to discover the industrial history of Thiers, a history dominated by the cutlery trade which, in the 19th Century, took over from the tanneries and paper mills. 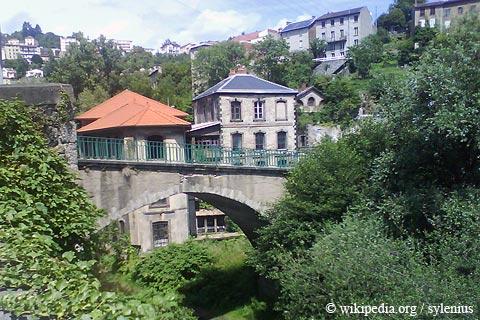 You can combine this walk with a visit to the contemporary art centre in the Creux de l’enfer (the name given to the most dramatic part of this valley).

We live near Thiers and in recent years have become aware of a revival, a renewed pride in the history of the town and the area around. It really is a rewarding place to visit - but best if you can visit in good weather.

Most visits to Thiers will be part of a trip around the Livradois-Forez Natural Regional Park and include villages such as Chateldon, a short distance north of here and overlooked by a ruined castle; and Olliergues to the south.

Map of Thiers and places nearby

Visit near Thiers with France This Way reviews

Plan your visit to Thiers, Puy-de-Dome

Regular market(s) are held in Thiers each Thursday & Saturday. (Markets are held in the morning unless stated.)

The French version of this page is at Thiers (Francais)