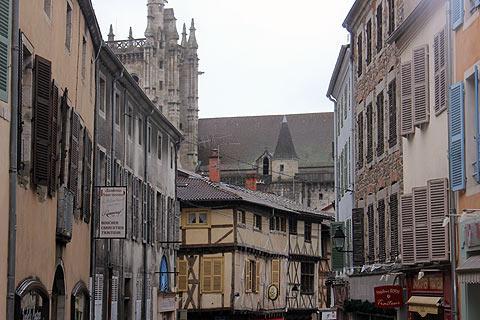 Ambert is a small town in the Puy-de-Dome department, in eastern Auvergne. The quiet, pleasant town is within the attractive surroundings of the Natural Regional Park of Livradois-Forez.

There is a small historic centre in the town which has some colombage houses and other buildings of interest, and Ambert is well placed for exploring the villages, hamlets and local countryside.

The Rue de Goye is one of the most interesting streets in Ambert: typical of an 18th century street, it is here that many of the rich merchants of Ambert lived. Some particularly attractive half-timber houses can be seen on the Place des Minimes and on Rue de la Grave where there are some interesting 15th century houses. 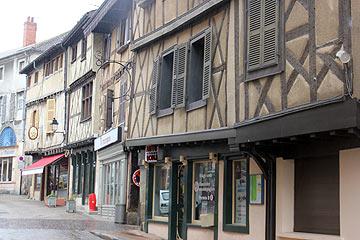 A building of particular interest in Ambert is the 15th century gothic style Church of Saint-Jean. Unusually the square tower, 50 metres high, is offset to one side of the facade: I was told later it is possible to go up this belltower for lovely views but didn't realise it was possible at the time of my visit. The mairie in the town is also interesting - a round building that was formerly the town grain hall.

Of more recent construction, the Caisse d'epargne at Ambert was built in the early 20th century in the style of architecture inspired by that of the spa towns which were becoming increasingly popular. Its cupola in particular is typical of this style.

You can also take a stroll in the well mantained park in the centre of Ambert.

For many centuries the town was the French centre for paper-making, with the high point for the industry occurring during the renaissance. There is a museum in the town to commemorate this history, and there is also an active paper mill where visitors are welcome (you will come across other paper mills as you explore the surrounding countryside).

The second museum in the town, the Maison de la Fourme d’Ambert, is dedicated to the longstanding tradition of cheesemaking in the town - above all the cheese called the Fourme d'Ambert. Ambert is a 'classified AOC' cheese - be sure to try it during your visit! Every two years the 'Fourmofolies' festival celebrates the Ambert cheese and other cheeses in the area.

A third museum, the Musée de la Machine Agricole et à Vapeur, is devoted to the local agricultural and industrial heritage of Ambert and features a collection of tractors and steam engines. 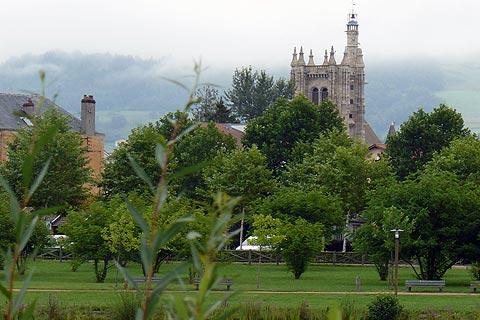 The town and region are mostly visited for the surrounding landscapes of hills, pastures and woodlands, unspoiled and ideal for walking and cycling on the quiet roads. Several waymarked paths are suggested by the local tourist office to help you make the most of your visit, including a walk along the banks of the River Dore and an interesting trail that passes some of the local paper mills.

Many of the local villages are of interest, and many have small historical centres, traditional churches (such as Champetières, Marsac-en-Livradois, Grandrif) or small local museums (Saint-Martin-des-Olmes). Others are in particularly lovely surroundings (eg Saint-Just, Valcivières, Saint-Ferréol-des-Cotes and Job).

The individual villages don't take long to explore but a day or two touring the area is recommended, incorporating a picnic or two or a visit to a local restaurant, and visiting a couple of the local workshops that are open to the public.

There are tourist trains that passes through the surrounding countryside of the Livradois-Forez region leaving from Ambert (summer only). You can head south to La-Chaise-Dieu and Sembadel or north to Olliergues. These trains pass through lovely scenic countryside.

Friends with children recommended a visit to the animal park at Bouy, where children can come into close contact with small animals (goats, pigs, rabbits etc) 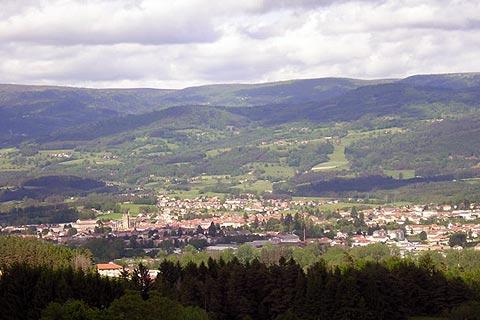 Ambert is in the Natural Regional Park of Livradois-Forez, a region of very pretty countryside. To explore the region more fully why not visit the twelve villages which have been selected for their particularly rich history: these are spread out across the park and so you get to explore the park and villages at the same time.

Map of Ambert and places nearby

Visit near Ambert with France This Way reviews

Ambert is classified as a recommended detour town (plus beau detour)

Plan your visit to Ambert, Puy-de-Dome

Regular market(s) are held in Ambert each Thursday. (Markets are held in the morning unless stated.)

The French version of this page is at Ambert (Francais)