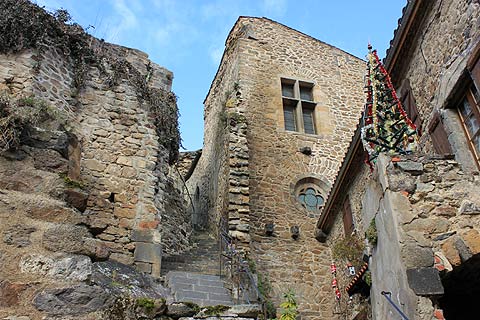 Saint Floret classified among the most beautiful villages in France. The village is in the Puy-de-Dome department in the Auvergne region.

Saint-Floret is a small village located in an attractive river valley and centers around the Place de la Roche with its church and steps leading up to the castle. The church dates from the 18th century and contains Baroque furniture. 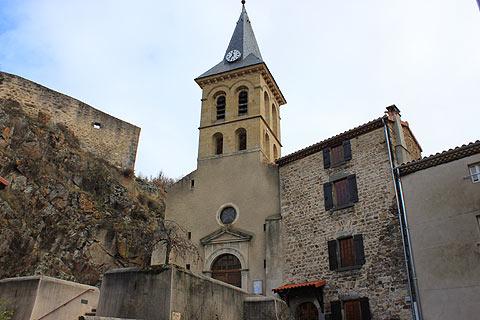 The castle is built on a rocky spur above the village and dates back to the 13th century. Not much remains except the castle donjon but inside the donjon there is a room with a vaulted ceiling and the remains of some wonderful murals telling the story of Tristan and Iseut. The frescoes are painted in beautiful, rich colours and parts of them are still in superb condition. The frescoes were painted in the 14th century and 13 of the original 40 or so still exist.

It is possible to visit the chateau and from here you can get superb views over the surrounding countryside. The chateau is open from June to October.

Below Saint-Floret village there is an old bridge crossing the river which has a small chapel on the top housing a statue of the Virgin in painted wood dating from the 13th century. When the village was bombed in the second world war a bomb landed under this bridge but fortunately failed to detonate.

There is also a church, du Chastel, high above the village which has an ossuary and some tombs carved into the rock: this church was built in the 13th century in the roman style, so is several centuries older than the main church in Saint-Floret village. This is another place to get excellent views over the countryside and also over the village.

France This Way comment: while it is attractive, Saint-Floret village is tiny and so worth a visit if you are nearby but not worth travelling a long distance to see. 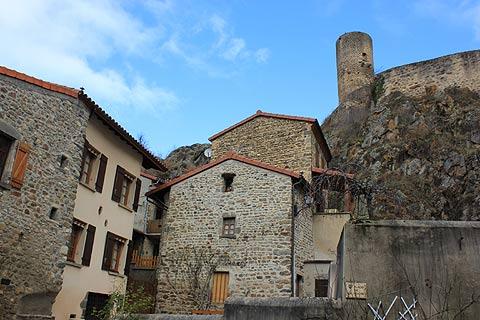 Several kilometers to the west of Saint-Floret is a picnic area and a natural spring. This one is particularly interesting as the limescale deposits have formed into a remarkably convincing shape of the head of a lion! The water in the source itself is red due to the presence of iron oxide.

Enthusiasts of Auvergne roman style churches will certainly want to visit those at Saint-Nectaire to the west of Saint-Floret and Issoire to the east of the village, and the chateau of Murol is another impressive site nearby.

Map of Saint-Floret and places nearby

Visit near Saint-Floret with France This Way reviews

The French version of this page is at Saint-Floret (Francais)