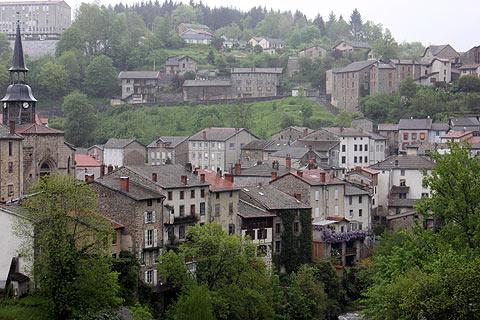 Olliergues is in the Puy-de-Dome department between Thiers and Ambert. It is in the pretty Livradois-Forez naturel parc.

Olliergues is one of the oldest villages in the region and has an interesting medieval centre. 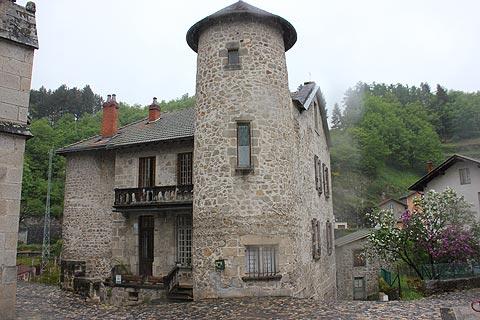 The streets of Olliergues climb upwards towards the church and the chateau and the houses are tall, often four-storey buildings, built from a brown-grey stone.

The church of Notre Dame d'Olliargues was built within the walled enclosure of the chateau and was originally the castle's chapell. It became the village church in 1842. Built in Gothic style in the 14th century the belltower is a later addition and is built in a style more common to the Lot and to Correze than to this area, with its bulbous shape.

The maison "des marchands" is one of the oldest and is lovely with its arched base and half-timber top. Many of the houses which date from the 15 and 16th centuries have towers which house the staircases for these tall buildings.

As well as the houses winding up the hillside the village used to have lots of terraced gardens on the slopes of the hills. These were supported by dry stone walls. Sadly these have largely been abandoned though there are plans to restore some of them and make a walking route to be able to see them.

The chateau above Olliergues now holds a small museum of ancient trades, especially those involving wood, metal and textiles which were particularly common to the region. 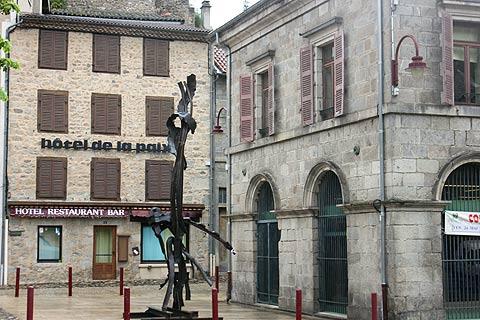 One of the tourist trains of the Livradois-Forez park stops at Olliergues and then takes a scenic route to Ambert.

Ambert is in the pretty Livradois-Forez natural park and a good way of seeing more of the park is to follow a circular route around twelve villages which have been highlighted as being particularly interesting. These are: Courpiere, Thiers, Chateldon, Billom, Sauxillanges, Auzon, Allegre, La Chaise-Dieu, Viverols and Ambert.

Map of Olliergues and places nearby

Visit near Olliergues with France This Way reviews

The French version of this page is at Olliergues (Francais)