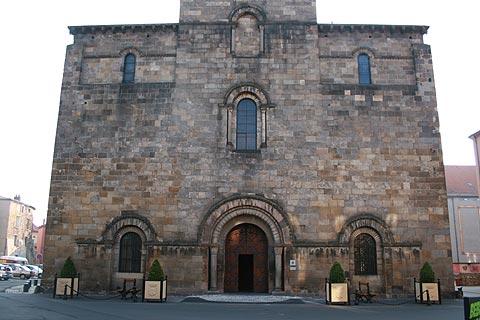 Issoire is south of Clermont-Ferrand in the Puy-de-Dome department of the Auvergne, near the 'autoroute to the sun' that carries thousands of holidaymakers south to the Riviera each year.

Known affectionately as the 'Tuscan Auvergne' the region is marked by the Mediterranean architectural style and clear sunlight, and Issoire is set among rolling green valleys with the softened volcanoes of the region as a backdrop.

Although it was an important town as long ago as Roman times, Issoire was almost completely destroyed during the Wars of Religion and little remains of the town from before this time. It is now an active bustling local town, with its own personality and fascination.

Start your visit in the centre of Issoire with a visit to the church, the most important historical monument in the town. The Church of Saint-Austremoine is an attractive example of Romanesque style churches and dates from the 12th century, and is interesting because of the high level of decoration - more than usual for this style of building - both on the inside and the outside. 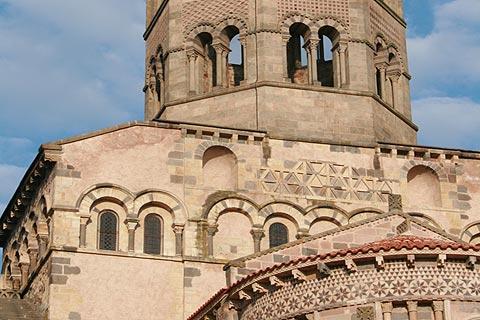 On the outside, the detailing around the apse is very impressive. Almost all surfaces of the interior of the church are painted, often with patterns in many different colours, giving the interior a quite different aspect to most churches. There are also numerous candelabra type lights between the columns further enhancing the appearance.

The church also has a fascinating crypt and is considered to be one of the most important churches in the Auvergne region.

At the time of my visit, first they turned on all the candelabras, showing the interior at its best, then the sun burst forth through the stained glass windows - extraordinary, because not only did it make the windows more beautiful, but these also threw great areas of coloured light across the interior walls of the church, perhaps the first time I had seen this happen so effectively.

There is also a belltower in the town centre in Issoire which you can ascend for a nice view across the town.

Apart from these individual monuments, Issoire itself is a pleasant place for a stroll, with open squares joined by winding narrow streets. The old town has some interesting houses, including some historical arcaded buildings, and there are various other buildings that will catch your attention as you wander (some have signs to highlight them, see Issoire Tourist Office for information).

The main square, the Place de la Republique, features lots of attractively painted houses, some with cafes at ground level.

The town has clearly escaped the tourism and wealth of the Provencal towns further south in France, to which the architecture of Issoire often bears more than a passing resemblance. I found the centre of the town to be a very pleasant, unpretentious kind of place to amble around, and recommend you find the time to explore if in the Puy-de-Dome region. 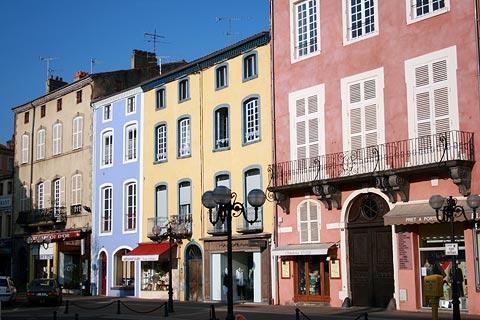 Two villages that we particularly recommend you visit, both within a few kilometres of Issoire, are those at Montpeyroux and Usson - both are classified as most beautiful villages of France, and have attractive medieval centres to explore.

Map of Issoire and places nearby

Visit near Issoire with France This Way reviews

Plan your visit to Issoire, Puy-de-Dome

Regular market(s) are held in Issoire each Saturday. (Markets are held in the morning unless stated.)

The French version of this page is at Issoire (Francais)