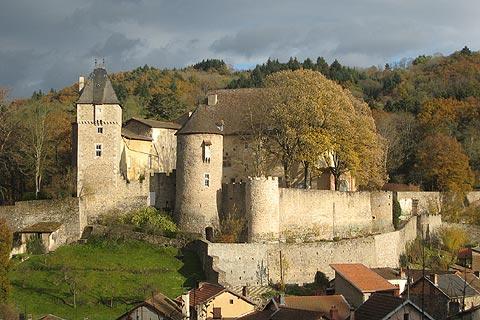 The village of Chateldon, in the Puy de Dôme department of the Auvergne, is known in France and elsewhere for two things: its very fine spring water, allegedly the favourite of Louis XIV and served in many smart restaurants; and the fact that Pierre Laval, the Vichy Government Prime Minister, was born here and bought the Chateau in the 1930’s. It should be known for better reasons!

As you drive into Chateldon on the road from Puy Guillaume you see the 13th Century chateau rising up above the village. Walking through the village you realize that much of the original 13th and 14th century town fortifications still exist and now form part of the walls of buildings and houses still in use. 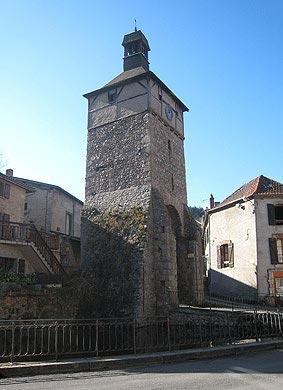 In the centre of Chateldon you will see the 15th century Church of Saint-Sulpice, parts of the medieval ramparts, 12th century castle and the chateau stables as well as the 16th century village centre with some lovely half-timbered houses, the 17th century ‘maisons de vignerons’ and the belfry.

You will also see the more recent 19th century buildings and bath house.

For the archaeologically minded it is an exciting place to visit and for those who just love old places the village, which aspires to be ‘un des plus beau village de France’, is well worth an afternoon’s wander.

Pick up the leaflet at the mairie, ‘Chateldon, petite ville au grand renom’ and it will guide you round this fascinating place.

Chateldon has had a very interesting history, which stretches back to the middle ages and before, and there remains much evidence of this. A knowledge of this history is useful to help you make the most of your visit here. Nowadays it may seem a small and unimportant medieval village with its shop, pharmacy and ‘maison de la presse’ but the buildings tell a different story.

In the 13th century Chateldon flourished. Tanneries were set up beside the river Vauziron that flows down from the Montagne Bourbonnaise behind and, tradition has it, that the world-famous cutlery industry that flourished in Thiers owed its beginnings to 13th century Chateldonians who made farm implements: Chateldon went into decline as a result of the 100 years war and then the Black Death of 1348 and many of the toolmakers fled to Thiers to escape the plague.

The 15th century saw a revival, trade flourished once again, and magnificent stone and timbered buildings from this date still stand around the square that was once a market square. The 16th century saw another change in the fortunes of Chateldon as vineyards began to cover the slopes surrounding the village. 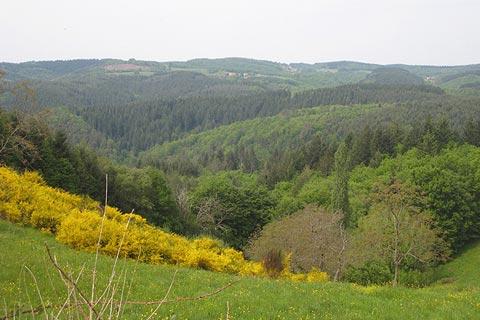 Much of the wine produced here was taken to the nearby Port de Ris on the River Allier, loaded onto small, specially built boats and transported via the Allier and Loire to the coast or Paris. Recently the Mairie in Chateldon has been responsible for restoring some of the typical 17th century houses of the winemakers, typically with a dark stone built winery in the basement and on the ground floor and living quarters above.

Wood and wine were the materials for Chateldon’s staple industries throughout the second part of the 19th and early 20th centuries: a furniture building industry developed here and in 1885 the Puy de Dôme was the third largest wine producing area in France, with the slopes around Chateldon covered with vineyards. Phylloxera destroyed many of the vines in the 1890s and pine plantations started to replace them.

Most of the activities in the region near Chateldon are based on outdoor activities in the Regional Natural Park of Livradois-Forez. You can also visit small towns and villages such as Thiers and Courpière in the northern part of the park.

Map of Chateldon and places nearby

Visit near Chateldon with France This Way reviews

The French version of this page is at Chateldon (Francais)