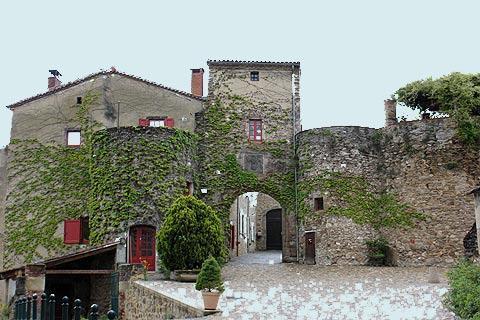 The village of Auzon is in the Haute-Loire department of France, in the Auvergne region. It is a pretty village on a hill in the Livradois-Forez natural park and close to the 'most beautiful village' of Lavaudieu.

From the river at the bottom of the village Auzon climbs 50 meters up to the lovely 12th century church at the top. Surrounding the church is a cluster of houses built of stone and often three stories high. 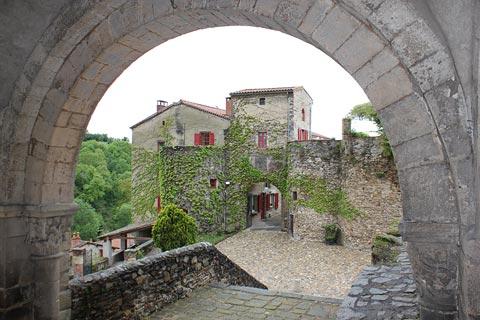 You can park in the car park at the bottom of the village and take one of the cobbled paths up to the top, passing through the fortified stone entrance gate on the way. Some of the original protective walls that defended the village in medieval times are still in place, as are parts of the ancient castle.

Unfortunately little remains of the Chateau d'Auzon, which was largely destroyed in the 17th century then suffered further damage after the revolution, but you can still see a tower and a series of arcaded windows. In the 19th century a new building was built on the remains of the original castle.

As you pass through Auzon you can also admire the gardens perched on the edge of the hillside, and views across the forested hills that surround the village.

The medieval centre of Auzon is very pretty especially the church with its large arched entrance porch echoed by the stone archway leading to one of the houses behind. The Church of Saint Laurent was built in the 12th century and is a listed historic monument. It is a fine example of Romanesque architecture, with fine carved capitals and some excellent murals painted in the 14th and 16th centuries.

There is an eco-museum in the village, established in the arched cellars of the mairie. The museum has displays relating to wine-making, mining, shoe-making and blacksmiths as well as ancient toys 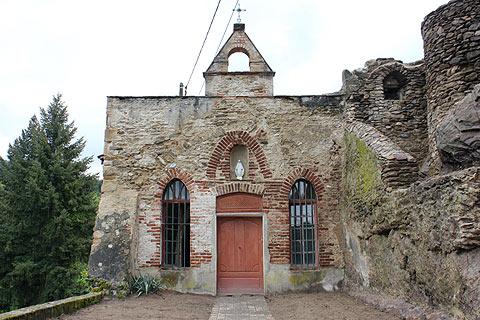 If the church of Auzon has inspired you to seek out other fine examples of Romanesque architecture then be sure to visit the abbey at Lavaudieu which is the most beautiful Romanesque building in the Livradois-Forez area.

A good way to explore the Livradois-Forez natural park is by making a circuit of the twelve villages and towns that have been highlighted as having particularly interesting features. As well as Auzon, the others include Sauxillanges, Billom, Chateldon, Thiers, Olliergues, Ambert, Veverols, La Chaise-Dieu and Allegre.

Map of Auzon and places nearby

Visit near Auzon with France This Way reviews

Plan your visit to Auzon, Haute-Loire

The French version of this page is at Auzon (Francais)