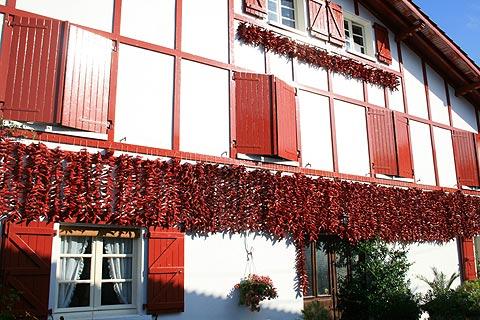 The Pyrenees-Atlantiques has several 'personalities' which together make a fascinating destination: the Atlantic coast around the towns of Biarritz and St-Jean-de-Luz; the pretty villages and outdoor activities in the Basque country; and the Pyrenees mountains.

The Pyrenees-Atlantiques department is situated in Basque country (in the Aquitaine region) in the far south-west of France on the border with Spain. The department has a different character in the east, where it runs into the mountains of the Pyrenees, and the west, which is essentially a coastal region. For travel planning purposes we consider the region as being in several parts:

The first two areas are easy to reach when you stay near the coast, and a day trip to the more mountainous east is also very pleasant. It is the chance to enjoy these contrasting environments that is a large part of the attraction when you visit the Pyrenees-Atlantiques.

The most popular coastal resort in the Pyrenees-Atlantiques is the trendy city of Biarritz, dominated by 19th century architecture and a popular beach and a good place to stay when exploring this region. The views along the coast path in Biarritz are among the best in France.

The nearby town of Bayonne is best considered together with Biarritz as more or less a part of the Biarritz 'conurbation' but has its own attractions and merits a visit in its own right: indeed, it is one of our favourite cities in France. At Anglet, the third town in the same group as Biarritz, there is a popular beach but little of interest in the town centre.

Further south along the coast you reach the bustling town of Saint-Jean-de-Luz, a very pleasant town with interesting villas to admire as well as the beach which can be accessed directly from the town centre.

If you stroll a short distance south from here you reach the port town of Ciboure, which is the quiet southern neighbour to Saint-Jean-de-Luz and set around a picturesque harbour where Matisse and Ravel both once lived (you can see their houses).

Biarritz and Saint-Jean-de-Luz are very diffferent in character which is surprising given how close together they are and we recommend visiting both during your stay here.

Continuing south, the last town that you reach before the Spanish border is the beach resort at Hendaye. While here we also recommend you visit Hondarribia, just across the border into Spain (so not in France) and with a lovely medieval centre.

Villages and highlights near the coast

Near the coast and in the first foothills of the western Pyrenees there is a cluster of pretty villages to explore including Ainhoa and Sare, both listed among the 'most beautiful villages in France'. The two basque villages at Espelette and Itxassou are also very picturesque and interesting - Espelette is well known for the red chillies which are grown in the region and hung up to dry on the outside of the houses.

Also nearby the village of La Bastide-Clairence is pleasant to explore, and there are also some traditional medieval basque houses and a castle (partly in ruins) at nearby Bidache. Other villages we came across with good examples of the local basque architecture include Saint-Martin-d'Arrossa and Saint-Etienne-de-Baigorry.

When you visit the basque villages be sure to go inside the churches. The churches often look quite plain from the outside but inside have galleries around the walls, which is very attractive.

At La Rhune you can take a scenic train to the top of the mountain which is a very pleasant way to explore the countryside and has spectacular views and close to Saint-Pée-sur-Nivelle you can visit an attractive leisure lake.

Two of the larger towns here are the spa town of Cambo-les-Bains and Saint-Jean-Pied-de-Port, which has an attractive medieval centre.

Note: it is quicker to reach this area of the Pyrenees from the coast by following the main road east towards Toulouse (the A64/E80 road that passes across the north of the Pyrenees-Atlantiques department) and then taking the roads south from Pau, rather than travelling across the small roads in the hills - but rather less scenic!

Among the first towns you reach as you travel east through the Pyrenees-Atlantiques and enter the Béarn region are Orthez, the fortified town of Navarrenx, Sauveterre-de-Bearn and Salies-de-Bearn. They are all quite small towns and each has its own particular attractions.

A little further east and you reach the town of Pau. Pau is best known for its view of the Pyrenees and for being one of the first towns in France to have a large English expat population (about 100 years ago), and is a pleasant town to explore with some interesting historic monuments.

Close to Pau at Lescar you can see a 12th century cathedral in the romanesque style, and the town of Oloron-Sainte-Marie is also in this part of the department, to the south-west of Pau and approaching the 'proper' mountains.

To the west of the department, one of the most popular attractions in the Pyrenees-Atlantiques is the zoo at Asson, quite a small zoo but with larger mammals such as tigers, monkeys and kangaroos, many smaller species (often animals that are now endangered species) and also an exotic garden.

Also close to Asson you can visit the spa town of Eaux-Bonnes, in a picturesque steep-sided and forested valley.

In the south-east of the Atlantic-Pyrenees you reach the mountains of the Pyrenees National Park and the most dramatic scenery in the department.

Further east the village of Laruns is one of the most interesting in this region and well placed to explore the Ossau valley.

It is of course the scenery that is the main attraction, and to the east of Laruns you are entering the high mountain region of the Pyrenees, with beautiful scenery to be enjoyed in the deep valleys and from the mountain passes.

A particular highlight close to here that we enjoyed visiting (and close to the border with Spain) are the Gorges de Kakouetta at Saint-Engrace - a two kilometres (each way) walk along the bottom of a verdant gorge, with cliffs high above the valley bottom, and a pretty waterfall.

Map of Pyrenees-Atlantiques and places nearby

See an index of all Pyrenees-Atlantiques communes