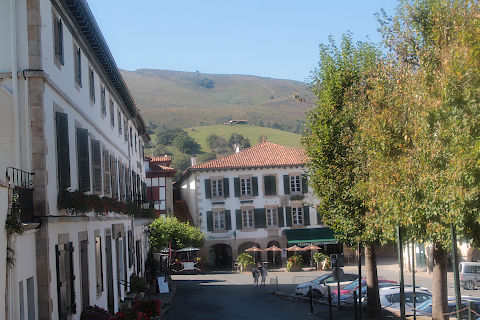 Sare is deep in Basque country near the Spanish border, 14 kilometres south of Saint-Jean-de-Luz and 20 kilometres south of Biarritz. It is classified among the 'most beautiful villages of France' and is a lovely little Basque hilltop village in the historical Labourd province.

France This Way comment: Sare is very picturesque, but also very small and a visit will take less than an hour. The nearby villages of Espelette and Ainhoa are similar but more extensive. 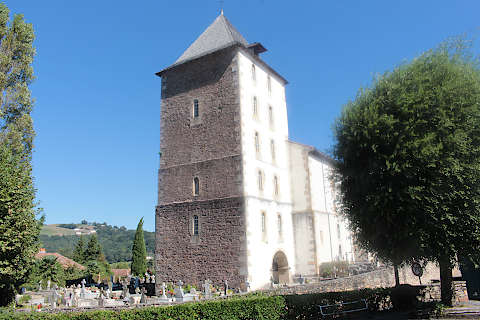 The village is centred around the Place du Fronton, where you will find Sare tourist office and which is a good place to start your visit. A 'fronton' (hence Place du Fronton) is a place where the traditional Basque sport of Pelote is played, with two players and a ball which is hit against a wall, rather like playing squash outdoors.

Around this main square there are several restaurants, and various streets that lead to the edge of the village. They reach the countryside very quickly in this small village so you can explore all of them! There are attractive views of the surrounding hills from many places in the village.

Be sure to take a look at the 17th century Church of Saint Martin as you explore among the village houses. Basque churches have the unusual feature of having rows of balconies - Romeo and Juliet style - along the walls, making them much less austere on the inside than the outside. In the church at Sare there are three rows of balconies, and the wall around the altar is painted with biblical pictures. Outside the church you can stroll around a pretty cemetery.

If you have time to explore, you can also see a pretty little medieval bridge about 15 minutes walk from the centre of Sare in the direction of the Grottes de Sare, or follow the medieval pathway called the Galtzada that passes through the villlage: you will have nice views of the village and see several small 17th century oratories.

You can also visit the 'Museum of the Basque Gateau' at Sare.

Sare village is set in the 'shadow' of mount Rhune which dominates the skyline in much of this part of south-west France. The surrounding area is very pastoral, and rural, with cows chewing grass in the fields. Walking is very popular in the area and the National Pathway GR10 passes through the area.

A popular side trip is the small train to the summit of La Rhune, which has lovely views to the coast to the west and the Pyrenees to the east. The neighbouring villages of Espelette and Ainhoa are also pretty and well worth a visit.

About six kilometres south of the village you can visit the Grottes de Sare, a large cave that was inhabited in prehistoric times. At Ortillopitz, in a lovely location close to Sare, there is a large farmholding called 'la Maison Basque de Sare which has been restored to show what a farm and surrounding gardens were like in the 17th century - very interesting.

Map of Sare and places nearby

Visit near Sare with France This Way reviews

Plan your visit to Sare, Pyrenees-Atlantiques

The French version of this page is at Sare (Francais)