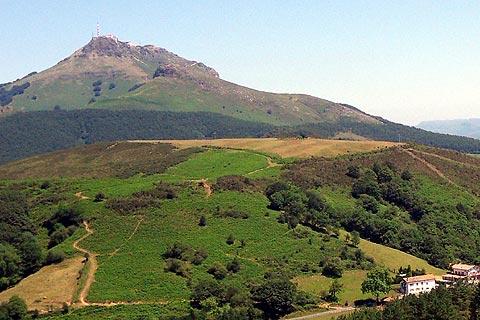 The La Rhune 'mountain' is in the western Pyrenees, near the villages of Sare and Ainhoa and just inland from St Jean de Luz. It falls in Basque country, on the border between France and Spain.

Various dolmens, menhirs and prehistoric sites are found on the mountain, indicating that it has also been important to the locals for many thousands of years, while more recently it has become an important site for the local Basque population.

Although a relatively low 'mountain' (905 metres altitude) La Rhune is a popular destination and local attraction, in part because it is the highest summit in the immediate region and in part because of its ease of access. From the top of La Rhune there are exceptional views in all directions, across to the Pyrenees and out to the Atlantic - and very far reaching in all directions.

The top of the mountain itself also has a triangulation point, a cafe and giftshops. There is also a prominent transmission mast but no problem because you will be looking out across the surrounding mountains!

It is possible to take a small train that climbs its way up the mountain through the pretty countryside. Opened in 1924 and called 'La Petit Train de la Rhune' the train leaves from Col de Saint-Ignace and is a very pleasant way to see the landscape of the western Pyrenees, and perhaps the sheep and wild horses that also live in the mountains. You can then descend the mountain on the train or on foot.

The return journey to the summet by train costs around 20 euros: this sounds expensive, but the journey takes about 40 minutes each way, so we thought it was quite good value for money. Alternatively there are many walks and hikes that lead around and up the mountain.

You need to choose a clear day to go up La Rhune, or you will be looking at a lot of cloud! We went up in September and dense clouds appeared from nowhere just as we arrived, so we had about two minutes to run around the mountain top before the views disappeared. We had lovely views from the train on the way there and back though!

Remember to bring something warm as well - it can be much colder at the top of the mountain than at the bottom, as we discovered when standing in freezing fog in out t-shirts waiting for the next train to go down...

Note: Until a couple of hundred years ago it was believed that witches would congregate at the top of the Rhune mountain - so the local villagers paid for a monk to live their in an effort to deter their nocturnal gatherings.

It is the combination of the traditional Basque villages such as Sare and Ainhoa, the gentle mountain scenery and the proximity of the Atlantic coast with resorts such as St Jean de Luz and Biarritz that together combine to make this area an interesting and varied destination.

Personally we like to stay on the coast and make day trips into the hills but if your priority is to enjoy the scenery and go hill walking or cycling you will probably prefer to stay inland (although choice of accommodation is of course much less in the small villages of the region than in the bustling seaside resorts).

Map of La Rhune and places nearby

Visit near La Rhune with France This Way reviews

The French version of this page is at La Rhune (Francais)