The Church of Notre-Dame-de-l'Assomption is in the centre of the village of Ainhoa, a village listed among the "most baautiful villages in France" and situated in the French Basque country of the western Pyrenees.

France This Way comment: the church in Ainhoa is an interesting and impressive example of a typical basque church in this region, and interesting to visit while you are exploring

The original church was built in Ainhoa in the 13th century, by a religious group of Norbertine (Prémontré in French) monks. The site was partly selected because it is on one of the most important pilgrim routes to Saint-Jacques de Compostela in Spain, the principal destinations for pilgrims across Europe in the middle ages. 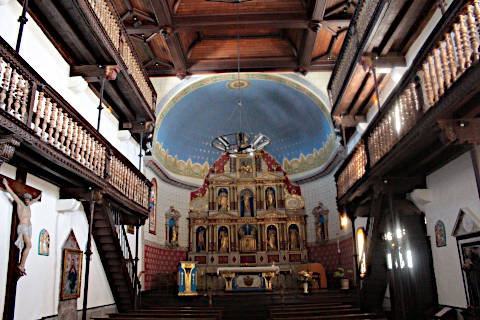 On the side wall of the church you can see a clue that Ainhoa was not always such a peaceful village: in times of war the village was used as a place of refuge and there are slots in the side walls that allowed the people inside to shoot at the invaders.

The church was substantially rebuilt and transformed in the 16th and 17th centuries, and was still under the control of the Norbertines at this time. The plan of the church is very simple, a rectangle 36 metres long with a single nave, and a round end to the church that has a quarter dome ceiling above the altar.

Next to the church there is a small cemetery with some interesting ancient gravestones that also merits a stroll, and on the other side of the cemetery is a fronton wall, used for the traditional Basque game of pelote..

The porch in front of the church is one of the most recent additions (17th century) and quite different in style to the main building. The porch supports the four storey belltower and slate roof.

One of the most interesting features, and very traditional in churches in French Basque country, is the three rows of lovely wooden balconies around the inside walls of Ainhoa church, reached by an equally impressive starcase. These were installed in the church in the middle of the 17th century, although it was only from the 1970s that women were also allowed to use them - before that it was men only!

The other interesting feature inside the church is the altar, under the dome area which is painted in an azure blue and golden stars.

The altar has rows of statues in front of a blue background and inset in the golden altar, in the classical style with columns and frontons (the triangles above the statues, an idea borrowed from the front of Ancient Greek temples) incorporated in the design. The central statue in the altar is of Notre-Dame de l'Assomption.

You can pay one euro to turn on the lighting and music if you want to see the altar at its best.

Monastic communities were all disbanded after the revolution, and the church was used for storage after this time (end of the 18th century). 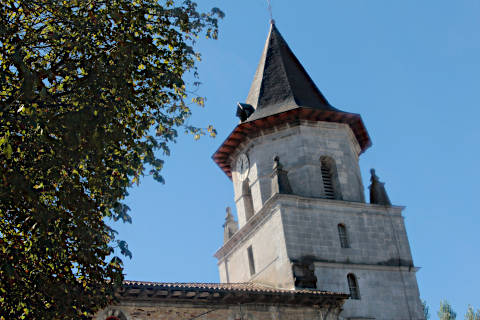 Of course, you will also want to explore Ainhoa village while you are here. Other traditional villages nearby that are also attractive include Sare and Espelette, with several others to investigate if time permits....

Photos of Ainhoa church of Notre-Dame

Map of Ainhoa church of Notre-Dame and places nearby

Plan your visit to Ainhoa church of Notre-Dame, Pyrenees-Orientales