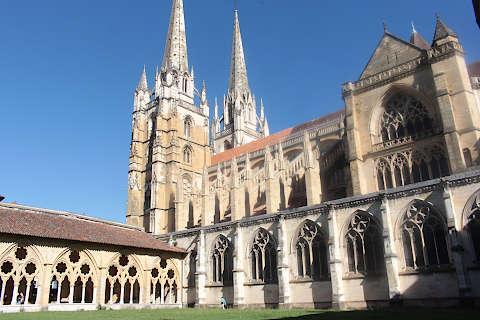 The Cathedral of Saint-Marie we see today in Bayonne includes elements from various historical periods, from the 12th century onwards, and is on the site of an even earlier church. This earlier church was destroyed by fire and the main part of the current cathedral built between 1258 and 1450 (two earlier fires had caused damage, then a larger fire dstroyed part of the cathdral and a substantial part of the town in 1258).

Although the original church was in the roman style, the current cathedral was built in the gothic style. It was further transformed at the end of the 19th century when a large program of restoration was carried out and the two spires, each 85 metres high, were added to the facade.

The adjacent cloister was built in the 13th-14th centuries, also in the gothic style. It was restored substantially at the same time as the cathedral, at the end of the 19th century, and it was also at this time that the north side of the cloisters was removed. A cemetery had previousy stood in this location, which is why you can see funeral slabs against the walls of the cloister.

The imposing cloister of the cathedral is one of the largest to be found in France, and since it was built it has played an important role, not just for the cathedral but also for the city: it was used as a meeting place for the town council and the market holders, for example.

The cathedral holds the shrine of Saint-Léon de Carentan, bishop of Bayonne in the 9th century.

There are seven chapels around the apse, as well as other chapels along the side of Bayonne cathedral. The paintings in many of these chapels have been restored to their original beautiful colours, and the ceilings restored with their original patterns. These elements are the highlight of your visit, and are a clue as to what cathedrals and churches were really like in medieval times - not necessarily the cold and dark spaces we see today!

Another unusual feature is the 'keys' in the vaulted ceiling. These have been restored and painted, and represent, for example, a castle, and a badge incorporating the fleur de lys.

There are also numerous artworks and other items in the cathedral, as well as colourful stained glass windows and an imposing organ. The majority of these items are relatively recent in origin, mostly 18th - 20th century.

There are several monuments of interest to see in the historic city around the cathedral: see the Bayonne guide.

Map of Bayonne cathedral and places nearby

Visit near Bayonne cathedral with France This Way reviews

The French version of this page is at Bayonne cathedral (Francais)