Ainhoa is a village in the Labourd province and deep in the Basque country close to the Spanish border in south-west France. The village is classified among the 'most beautiful villages of France' and often visited as an excursion from one of the nearby Atlantic coast resorts such as Saint Jean de Luz and Biarritz.

Ainhoa was an important stop on the pilgrim path to Santiago de Compostella, where many of the routes from France converged, which is why the village developed here in the 13th century. The original village was destroyed by the Spanish in 1629 and the village you now see was built in the 17th and 18th centuries.

France This Way comment: the village is small and has little more than a main street and a large church, but it is very pretty, pleasant to explore and the surrounding mountains make the setting very attractive.

Ainhoa is a lovely Basque village with a great deal of charm and houses that are very good examples of the local architecture, with the half-timbered wood almost always painted in the deep red and green colours traditional of the Pays Basque.

Perhaps the most curious feature of Ainhoa is that the buildings on one side of the street appear to be more decorative, and have more balconies, than those on the other side of the street. This is because the local tradition is to build houses with their backs to the sea, for protection against the wind and rain, so on one side of Ainhoa main street you are seeing the backs of the houses.

Personally I found the slightly more austere 'house backs' as attractive as the more decorative fronts, and I am guessing that most people will not notice the difference. The overhanging rooves that protect the half-timbered houses are another characteristic of the architecture of the region.

Ainhoa Church of Notre-Dame de l'Assomption originally dates from the 13th century although it has substantial later modifications made in the 17th century including the addition of a belltower. The church was built on the site of a fortified manor house that stood here in the 12th century. See Ainhoa church for information

Inside the church you can see the two rows of wooden balconies that are commonly found in Basque churches (some have three rows) and an ornate altarpiece beneath a dome painted with sky blue and various decorations. The church is listed as a historic monument because of the unusual wooden balconies. The adjacent cemetery contains some interesting early gravestones.

Being a Basque village, Ainhoa also has a 'fronton' wall next to the cemetery where old and young have played Pelota, the local sport, since the wall was built in 1849. The village also contains several rather upmarket arts and crafts shops and various cafes.

Another historic monument in Ainhoa is the lavoir (ancient washhouse), in a rather gloomy position on the edge of the village in the region called Dancharia (at the lowest part of the village centre). You are following in famous footsteps if you visit the lavoir: it is said that Napoleon III stopped here in 1858.

Note: in recent years the name Ainhoa has also gained popularity in France as a girl's first name. 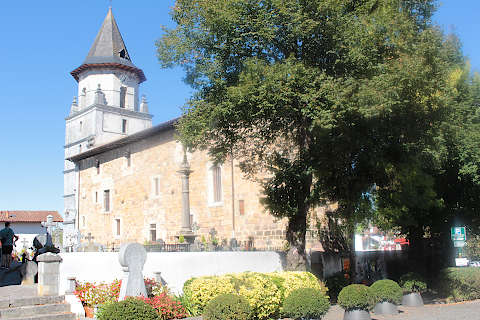 The village is a common starting point for several walks in the low mountains of the region, and is also very popular with cyclists. Ainhoa tourist office have a useful leaflet that shows a map with several suggested walks of various difficulties and distances in the nearby forest and countryside.

The area around the village is known as the Forest of Ainhoa and is well known for the diversity of wildlife it contains (we saw a small deer but I am pleased to say we didn't come across any of the wild boar that are said to live in the forest).

Just outside the village you should visit the small Chapel of Notre-Dame de l'Aubépine on the edge of the Atsulai mountain. This chapel was built in the place where the Virgin Mary once appeared to a local shepherd, and has far reaching views across the countryside.

When you visit Ainhoa you will be aware that part of the lovely setting is created by the Rhune mountain that stands above the village. You can ascend the Rhune mountain on a small train through very scenic countryside. The neighbouring villages of Espelette and Sare (another 'most beautiful village of France') are also both very pretty and well worth a visit

Map of Ainhoa and places nearby

Visit near Ainhoa with France This Way reviews

Plan your visit to Ainhoa, Pyrenees-Atlantiques

The French version of this page is at Ainhoa (Francais)