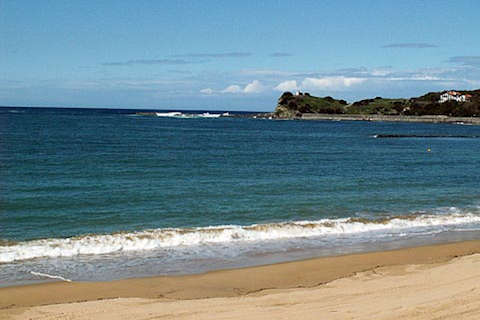 Anglet forms part of the Biarritz-Bayonne-Anglet 'conurbation', on the Atlantic Coast in south-west France and running along the Adour River to the north. The beach at Anglet is pretty much the southern end of the very long (200km) stretch of beaches that run in a more or less continuous row from Arcachon to Biarritz.

France This Way comment: although Anglet has a town centre area as well as the beaches, the town centre is of limited interest and the coast, natural environment and beaches are the principal attractions.

As with most of the beaches along this part of Atlantic, the five kilometres of beaches in Anglet are typically long and sandy. Behind the beaches the landscape is mostly of open grassy areas and small forested areas. There is a promenade popular with walkers, cyclists and joggers behind a large part of the beach.

There are several 'named' beaches here in Anglet. Travelling south from the Adour estuary to the Biarritz peninsula they are: Barre, Cavaliers (often used for surfing competitions), the Dunes (unofficially this is a naturist beach, and not surveyed), the Ocean, Madrague, Corsaires, Marinella, Sables d'Or (with lots of bars and restaurants), Club (not surveyed) and the beach of the Petite Chambre d'Amour.

If we had to choose just one Anglet beach to visit we would probably opt for the Plage de la Petite Chambre d'Amour because of its lovely backdrop overlooked by a cliff (although its proximity to Biarritz can make this beach one of the busiest here) or the lovely Plage de la Madrague.

The section of coast towards the southern end of the coast (towards the Biarritz lighthouse) that is known as the Beach of the Chambre d'Amour (bedroom of love) is romantically named for a couple of lovers who became trapped here by the rising tide and drowned in the 17th century.

As with many of the resorts along the Atlantic coast, surfing is popular along with other beach activities, and numerous other sports and pursuits are available - walking, horseriding, cycling etc.

Natural environment and the Natural Park of Izadia

One way to explore the natural environment at Anglet is to visit the Natural Park of Izadia, just behind the dunes on the Adour River and with a nature trail that follows between two lakes. Here you can learn about the sensitive natural environment and plants and animals that manage to co-exist in the harsh coastal environment. The park is nicely maintained and the walk includes various marked viewpoints where you have the best chance of seeing the wildlife.

The paths through the extensive pine forest (Le Pignada) around the town are also pleasant - and very popular: I think half the population of Biarritz were in the forest when we visited!

If you like to keep active we noticed there is also a 'health course' (parcours santé) more than two kilometres long in Le Pignada which combines jogging with various bars and equipment which looked like a fun way to exercise in the forest but we were too lazy to try: an ice cream took priority.

Anglet has a pleasant centre based around a large open paved area with the church and town hall on the square that has managed to retain its own identity despite the close proximity of both Bayonne and Biarritz: rather like the town centre in a small country town, surprising given the position between Biarritz and Bayonne!

The most important building here is the Villa Béatrix Enea, a substantial villa built in stone around 1900 and now home to various government offices. Another is the Chapel of Notre-Dame de Refuge, an unusual 19th century design featuring various statues inset in the facade and a decorative entrance. Inside you can see stained glass windows and a gilded statue of the Virgin Mary.

Another way to appreciate the history and heritage of the town is to ask at Anglet Tourist Office for details of the route that explores various historic washhouses and mills in the region. We cycled the route but at six kilometres long it would also make a pleasant morning walk while you wait for the sea to warm up!

Fellow gardeners can explore the parks and gardens in the town centre. We came across several of these with interesting selections of plants, flowers and trees and all very well maintained. Among these are the Jardin André-Lichtenberger and the Jardin de Beatrix Enea.

Anglet is in a privileged position with Biarritz, one of the most charming resorts in France, to one side, and Bayonne, an impressive historic town with a cathedral to the other side.

If you travel further, you will like exploring Saint-Jean-de-Luz on the coast to the south, and the villages in the western Pyrénées such as Espelette to the south-east.

See more of the popular Atlantic resorts and beaches

Map of Anglet and places nearby

Visit near Anglet with France This Way reviews

Anglet is classified as a village in bloom (ville fleurie) 4*

Plan your visit to Anglet, Pyrenees-Atlantiques

Regular market(s) are held in Anglet each Thursday & Sunday. (Markets are held in the morning unless stated.)

The French version of this page is at Anglet (Francais)