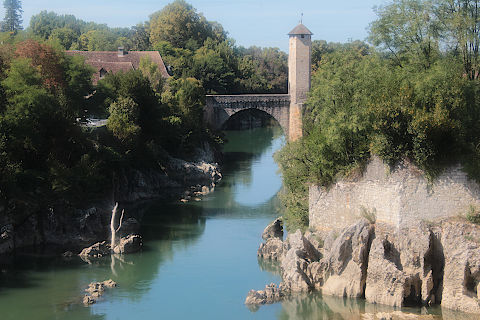 The town of Orthez is in the Pyrénées-Atlantiques department of Aquitaine, 60 kilometres inland from the coast at Bayonne and 40 kilometres north-west of Pau.

The historical importance of Orthez arose in part because of its role as a pilgrimage town: the town is on the pilgrim route that leads to Santiago de Compostela in Spain, and an important point for crossing the river. It was an important regional centre during the early middle ages.

France This Way comment: Orthez does not have a great deal of historic interest to see except the bridge, but the view along to the river to the bridge is very lovely and the town is pleasant for a stroll if you are in this region.

Note: Orthez Tourist Office is now on the Place d'Armes, and no longer in the Maison Jeanne d'Albret. 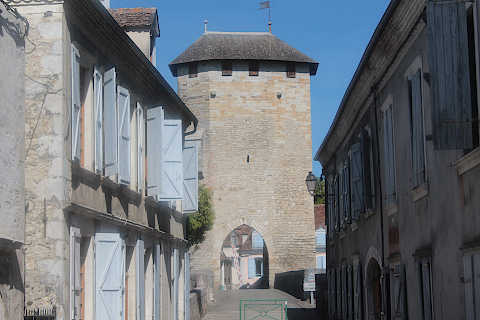 The 13th-14th century stone bridge across the Gave de Pau (the river), is undoubtedly the most impressive sight in the town. It has an unusual gateway-tower halfway across the arched bridge: the bridge originally had two of these defensive towers, and the central part of the bridge was connected to the river banks by wooden platforms which could easily be removed if the town was attacked.

Clustered around the end of the bridge you can see some interesting medieval houses although this area of Orthez is not very developed, perhaps because the railway line also follows the edge of the river.

From here you can walk into the town centre, with various small shops and restaurants. The highlight is the the 16th century renaissance style stone townhouse called the Maison Jeanne d'Albret, where the mother of Henry IV lived, and now a museum explaining the history of the Béarn region, where you can also see a French style garden with a medieval tower, and an impressive stone staircase.

Close to here on Rue de l'Horloge there is a hostel for pilgrims called the Hotel de la Lune. Very unremarkable from the street, if you go through the door (the door was closed and looked like the entrance to a derelict house when we visted!) you reach a charming courtyard and another impressive house with a tower.

A short distance east of here the Place Saint-Pierre is the main square in the town and has recently been redeveloped. The Church of Saint-Pierre that dates in part from the 14th century (although the belltower was added in the 19th century) dominates the square and is rather sombre but contains an altar and several sculptures worthy of attention as well as unusual painted columns.

To the north of Orthez town centre you can visit the pentagonal tower called the Tour Moncade and dating from 1250 that is all that remains of the castle that once stood here. Although there is not much castle to see, the views across the Béarn countryside are excellent from here!

Market day in Orthez is Tuesday. 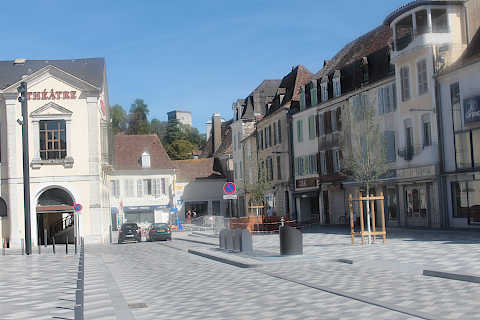 A short distance south-east of the centre of Orthez you can visit the Base de Loisirs d'Orthez-Biron, a leisure lake with a small beach and various activities for children.

Apart from exploring the other towns and villages in the region such as Salies-de-Bearn, Navarrenx and Sauveterre-de-Bearn, we recommend you take a trip to Biarritz about 70 kilometres to the west (one of our favourite resorts in France).

The Pyrenees are accessible to the south of Orthez.

Map of Orthez and places nearby

Visit near Orthez with France This Way reviews

Plan your visit to Orthez, Pyrenees-Atlantiques

Regular market(s) are held in Orthez each Tuesday. (Markets are held in the morning unless stated.)

The French version of this page is at Orthez (Francais)