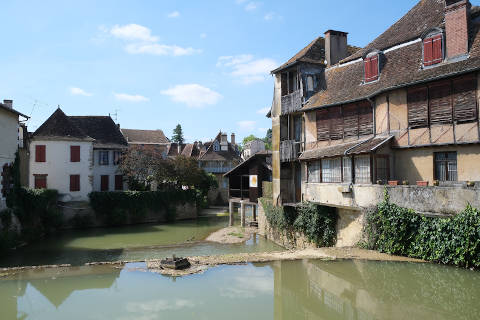 Salies-de-Bearn is a very picturesque town about 50 kilometres north-west of Pau in south-west France. The town has the river Saleys running through it, which for much of its journey through the town is in a man-made channel that can be crossed by two bridges in Salies-de-Bearn, on the pont d’Andioque and the pont de la Lune.

The town is full of little lanes and is lovely for ambling through and relaxing and both of the bridges in Salies-de-Bearn offer wonderful views of the town with its whitewashed buildings, painted shutters and wooden balconies.

The Place du Bayaa is the heart of the town and was originally built like a snail’s shell around the basin from where salt water was drawn. This has now been covered over but there is now a salt-water ‘fountain of the sanglier’ in the shape of a boar’s head in the square. 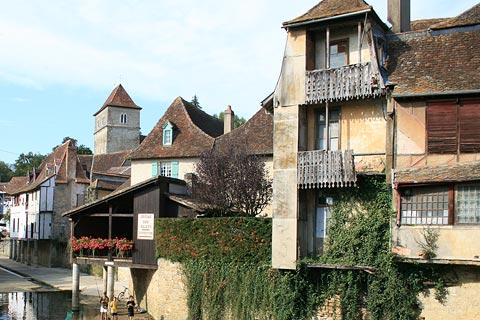 There is also a 16th century castle, the Chateau Saint-Pe, behind the Town Hall in Salies-de-Bearn and which used to hold the court of justice for witches!

There are plenty of bars and restaurants and hotels too if you decide to make Salies-de-Bearn a base for visiting the surrounding area. One of these is the Hotel du Parc which is a luxury hotel built for wealthy visitors to the thermal baths in the 19th century. The hotel has an Italian style lounge and has been the backdrop of various films, and part of the hotel building is now a casino.

The town originally developed around the local salt industry. Legend has it that this was discovered when an injured boar fell into a swamp and was discovered later covered in salt and perfectly preserved. The salt is thought to be essential to the taste of nearby Bayonne hams.

With the discovery of the thermal springs whose water is about 50°, thermal baths have been developed and also brought wealth to the town and well-being to its visitors. The salt waters at Salies de Bearn are particularly beneficial for gynaecological, rheumatic and paediatric ailments. The waters are ten times more salty than those in the sea.

The spa baths in the town are housed in an interesting looking building built in a Moorish style. Visitors can bathe in the waters, although for non-patients the waters are cooler and less salty.

There is even a museum dedicated to the salt industry - the Musee du Sel. As well as the salt museum there is also a museum of arts and traditions in Salies-de-Bearn.

Map of Salies-de-Bearn and places nearby

Visit near Salies-de-Bearn with France This Way reviews

Plan your visit to Salies-de-Bearn, Pyrenees-Atlantiques

Regular market(s) are held in Salies-de-Bearn each Thursday. (Markets are held in the morning unless stated.)