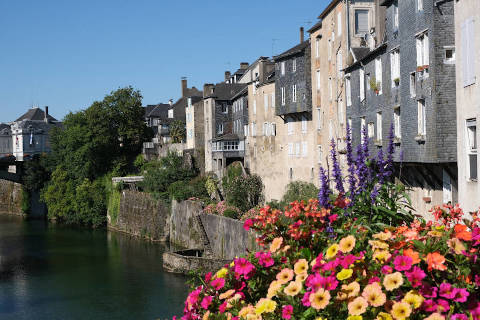 Oloron-Sainte-Marie is a small town to the south-west of Pau, in the Aquitaine region of south-west France with the pyrenees an ever present silhouette to the south of the town.

The town falls into three distinct areas, each based around one of the three main churches in Oloron.

Start your visit by looking along the gave d'Aspe (the word 'gave' refers to a river that is sourced in the Pyrenees and is subject to substantially increased flows due to weather conditions). The houses along the river front are very picturesque, with their balconies overhanging the river itself. 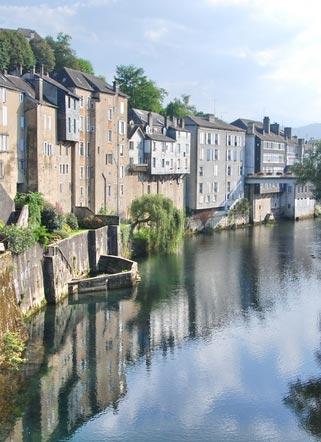 Region 1: The roman-gothic Sainte-Marie Cathedral is an attractive, small cathedral with a magnificently ornate entrance dating from the 12th century. Be sure to visit the cathedral treasury which contains some lovely items of jewellery and other decorative objects.

The alley between Rue Saint-Grat and the Impasse des Barats has various interesting features dating back to the earliest occupation of the town, while near the cathedral you can also see some excavated traces of the first habitations in Oloron, dating back almost 3000 years and called the tumuli.

Region 2: Head next for the medieval town around the Saint-Croix church, the second important religious monument in Oloron and dating from the end of the 11th century.

Here you can see the Tour de Grede, a sturdy square tower dating from medieval times.You can climb the stairs in the tower for lovely views, then also follow the walk along the ramparts which also impressive views across the rooftops of Oloron-Sainte-Marie and the surrounding hills.

Region 3: The third region of Oloron is around the Church of Notre-Dame (19th century), the town hall and the gave d'Ossau. The grand houses around the Place de la Resistance date from the towns period of prosperity in the 17th century.

The Park Pommé is well maintained and a pleasant place for a stroll in the shade of the trees.

Market day is Friday in Oloron, and is perhaps the best day to visit the town.

There are numerous small villages and hamlets to discover in the surrounding countryside, which is the highlight of a visit to Oloron-Sainte-Marie. The Pyrenees are accessible to the south, while the popular town of Pau, to the north-east, should also be visited.

Map of Oloron-Sainte-Marie and places nearby

Visit near Oloron-Sainte-Marie with France This Way reviews

Plan your visit to Oloron-Sainte-Marie, Pyrenees-Atlantiques

Regular market(s) are held in Oloron-Sainte-Marie each Friday. (Markets are held in the morning unless stated.)