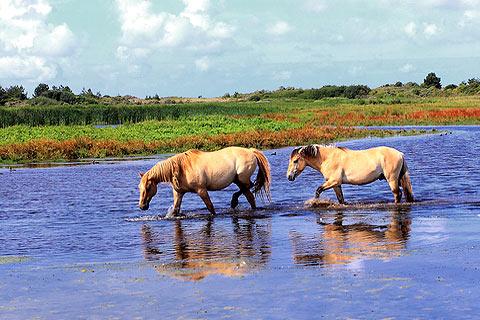 The Somme department of Picardy is often associated with the battlefields of the First World War - but there is much more than these to discover in the department, with cathedrals and castles, beaches and scenic natural environments

The Somme department is situated to the west of the Picardy region of north-east France.

It is perhaps useful to consider the department as falling into three regions, with Abbeville to the west; the region around Amiens to the east; and thirdly the coastal regions and resorts.

The coastal section of the Somme has two characteristics - the first is the number of popular beaches, resorts along the coast here such as Le Crotoy, Fort-Mahon Plage, Ault, Cayeux-sur-Mer, Mers-les-Bains and Quend-Plage-les-Pins.

Most of these resorts have long sandy beaches, and are spread along an extensive coastline 70 kilometres long.

The other highlight here in coastal Somme is the natural environment around the mouth of the Somme river and including the Marquenterre Park, especially known for the birdlife it attracts, and the Somme Bay, a protected natural environment that includes a great deal of wildlife and unspoiled scenery, often explored from Saint-Valery-sur-Somme.

Also on the coast you should visit the town of Rue to see the 15th century Chapel of Saint-Esprit, with a beautiful gothic style facade and interior and an imposing medieval stone belfry.

This region is centred around Abbeville, well known for its imposing gothic collegiale church. A short distance east of Abbeville you should also visit the village at Saint-Riquier to see the gothic style abbey church, above all its 15th century facade. Be sure to visit the Jardins of Maizicourt near to Abbeville.

Be sure to also head north from here to see the splendid Valloires abbey and gardens at Argoules - the gardens are very extensive and beautifully maintained and gardeners will want to spend the day here! Argoules itself is also an attractive village with a castle and church.

South of Abbeville we also suggest a trip to the Chateau de Rambures, a very sturdy medieval brick and limestone castle that is surrounded by some of the most attractive rose gardens and parkland in the Picardy region.

Further south again, there is another interesting garden at Senarpont which includes several different aspects such as a Japanese garden, a water garden and a bamboo maze.

The most important attraction to visitors in this part of the Somme is undoubtedly Amiens, best known for its cathedral but also with an interesting historical centre to explore, such as the area along the canals of the Saint-Leu quarter of the town.

To the east of Amiens it is certainly the sites that relate to the First World War that are the most popular with visitors. There is a circuit that explores many of the major sites such as the battlefields, memorials and cemeteries called the 'Circuit of Remembrance' (French: Circuit de Souvenir).

As part of this circuit, start your visit perhaps with the museum established in a medieval castle at Peronne where many artefacts from the war can be seen. Another important museum at Albert explains the lives of the soldiers in the trenches during the war.

This region of the upper Somme, with its many lakes and ponds, is also now very popular with anglers.

The village of Suzanne is to the east of the Somme and has an imposing 18th century red-brick castle and church of interest, while the nearby village of Corlu is also pleasant to stroll around.

To the west of Amiens at La Chaussee-Tirancourt your family will enjoy a visit to the recreation of a prehistoric village at Samara Park, while the extraordinary Underground City of Naours is north of Amiens and has more than two kilometres of underground passages and rooms.

Map of Somme and places nearby