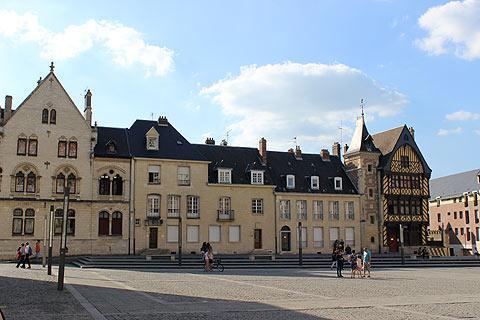 Amiens is in the Picardy region of northern France, north of Paris and south-west of Lille and Arras.

France This Way comment: Amiens suffered greatly in both world wars, and didn't benefit from housing developments in the 1960's and 1970's. However, since that time the town has taken trouble to enhance its appeal and these efforts continue to today, with several parts of the town now much improved.

The town is best known for (and most visited by tourists because of) the impressive 13th century Amiens Cathedral of Notre-Dame, the largest gothic style cathedral in France. See Amiens cathedral for details. 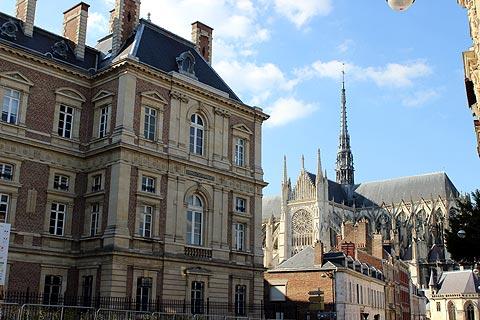 But there is more to Amiens than just a cathedral and the town has other highlights during a visit. Start to explore in the Saint-Leu region below the cathedral, which is a region of canals lined with small houses and a pleasant part of Amiens to explore, a popular place to promenade, and one of the busiest places for cafes and restaurants. It is also possible to take a boat ride along the river from here.

Another highlight in Amiens include the curious looking belfry (belltower) from the 13th - 15th century and one time important meeting point for the nobles of the town. The lower, square part of the belfry is original but the upper part, in baroque style, was added in the 18th century.

The Town Hall and Palais of Justice are important buildings from the 18th-19th centuries, both in the neo-classical style popular at that time, and the substantial 16-sided Cirque Municipal dates from the same period.

Of more recent construction, the Perret Tower is an interesting example of more recent architecture in Amiens. Built around 1950 it was one of the earliest skyscrapers to be built in France, and for many years was the tallest skyscraper in Europe.

The Museum of Picardy, established in another imposing 19th century building, has some interesting archaeological items, and paintings by Old Masters, along with an extensive range of paintings and items spanning the last 2000 years. To make the most of your visit please first see our information about Amiens history.

Enthusiasts of Jules Verne will want to visit the extensive museum and collection of items relating to the life of the famous 19th century author at Maison à la Tour, his home in Amiens for almost two decades at the end of the 19th century.

There are several interesting parks and gardens in Amiens (hence the 3* Ville Fleurie award), and a substantial park (of 300 hectares) to enjoy at the Hortillonnages - a marshy region where numerous canals criss-cross the garden and wildlife intensive landscape. The 'floating gardens' of the Hortillonnages area can be explored by foot or by boat and is a lovely way to spend a couple of hours. Vegetables from the Hortillonnage gardens are sold in the Saturday morning market at Place Parmentier. Once a year, in June, the market takes place on boats on the water with the traders dressed up in traditional costume.

There is also a zoo in Amiens which is quite small but has a wide range of animals, and the Parc Saint-Pierre in the town centre is a large park where you can escape the bustle of the town centre.

A couple of popular festivals are held in the town - Amiens film festival is held in November and Amiens Jazz Festival takes place each March.

Popular local dishes to try during your visit include those made from fish - typically carp, trout and Somme eels cooked with herbs; and from meat - often braised, or cooked in beer. There are also some interesting local cheeses to try such as the Maroilles, Vieux Lille and Dauphin). 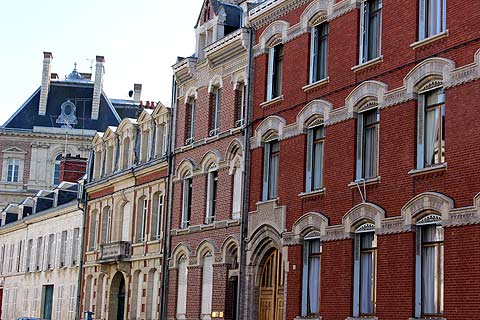 If you visit Amiens during the summer months the cathedral facade is lit to recreate the colours in which it was originally painted. Amiens is also home to one of the biggest and best Christmas markets in northern France, and this is another chance to see the light show illuminating the cathedral in its traditional colours.

Among the places of particular interest in the Amiens region are the renaissance period citadel at Doullens and the medieval city at Lucheux.

Map of Amiens and places nearby

Visit near Amiens with France This Way reviews

Amiens is classified as a listed town of Art and History

Plan your visit to Amiens, Somme

Regular market(s) are held in Amiens each Thursday & Sunday & Saturday & all day. (Markets are held in the morning unless stated.)

The French version of this page is at Amiens (Francais)