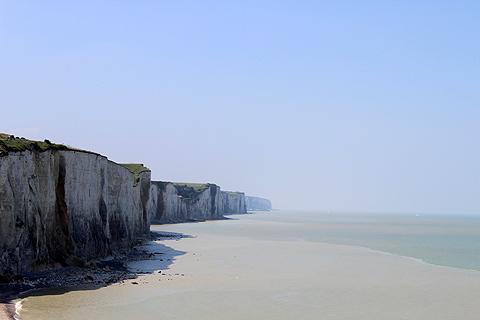 Ault is a quiet resort with stunning views over the chalk cliffs of the Cote d'Opale. At low tide the long sandy beach is popular as many beaches in the area are stony beaches. 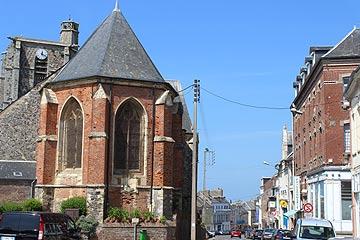 The resort of Ault is mostly centred around Onival at the northern part of the commune. There is a quiet shopping area with a few bars and restaurants. Hard to imagine that Ault was once a busy fishing village on a par with Dieppe and Boulogne. Erosion of the cliffs and various storms destroyed the greater part of the fishing port and the fishermen largely decamped to Le Treport to the west.

The church of Saint Pierre began life, in the 15th  century, as the second church of Ault but when the devastating storms and rock fall of 1583 destroyed much of the main part of Ault St-Pierre became the principal church of the town. The church has an  imposing quadrangular tower topped with four gargoyles and a small look-out tower.

Towards the end of the 19th century Ault developed as a seaside resort, however significantly later than resorts such as Mers-les-Bains and Le Treport. This has left Ault an altogether quieter place if you are looking for a relaxing holiday.

At high tide only the top, stony part of the beach is visible, and much of this is quite sloping. However at low tide a large sandy beach is revealed and has stunning views along the sheer white cliffs. Next to the town is an attractive line of white beach huts.

To the south of the town is the Bois de Cise, a pretty wooded area with some attractive early 20th century villas. There is also a pretty chapel, the Chapelle Ste Edith built in 1912 allegedly by one of the early residents of Bois de Cise in the memory of his  daughter, Edith, who died at 23 year old.

There is a walk you can do called the 'circuit in the footsteps of Victor Hugo' which follows a trip Victor Hugo wrote about from Treport to Ault. You could also walk up to the lighthouse 106m above sea level.

Places of Interest Nearby

Be sure to visit the beautiful Belle Epoque villas of Mers-les-Bains to the south-west and the Bay of the Somme and Saint Valery sur Somme to the north-east. The Bay of the Somme is a classified 'Grand Site de France'. Valéry-sur-Somme is a vibrant town with a lovely medieval centre.

You can find more travel ideas in the Somme guide and the Picardie guide.

Map of Ault and places nearby

Visit near Ault with France This Way reviews

Plan your visit to Ault, Somme

The French version of this page is at Ault (Francais)