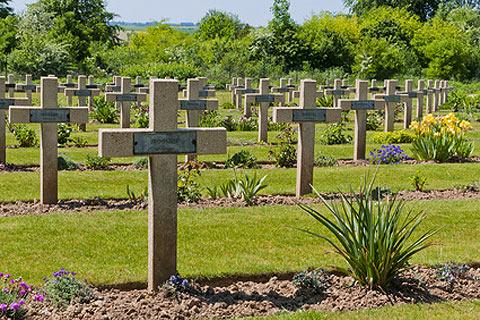 Péronne is a small town on the banks of the Somme river in the east of the Somme department of Picardy, about 50 kilometres to the east of Amiens. Although it is a quiet provincial town there are several monuments of interest here, and an important museum commemorating the First World War that is the principal attraction to visitors

Substantial parts of the town were reconstructed after extensive damage during the First World War. 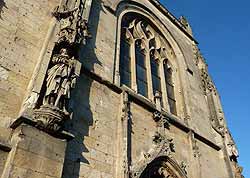 Among the most imposing historic monuments in Péronne is the Town Hall, which has an impressive renaissance style facade with various decorative elements and a roof that includes an ornate clocktower. The Town Hall dates from the 13th century although it was largely rebuilt in the 16th century after being damaged during a siege then substantially rebuilt in 1920 after WW1.

The building next to the Town Hall is a post-war reconstruction of the original 18th century building.

You can visit the Alfred Danicourt Museum to see an interesting collection of coins from the period of the gauls as well as other items of ancient jewellery, prehistoric tools and weapons and several 19th century paintings.

As with many places in the Somme, Péronne has a war cemetery which contains the graves of almost 2000 servicemen who died near here in the war.

Another notable monument is the Church of Saint-Jean-the-Baptist, above all for the south facade which is all that remains of the original medieval church, the rest having been destroyed during the war and subsequently rebuilt.

This Museum is one of the most interesting in the Somme, with a very large number of items from life during the war, both civilian and military, helping to recreate the period. The items are those that would have seemed ordinary to soldiers and inhabitants of Péronne at that time such as posters and everyday objects. There is also a large number of films from 1914-1918.

The building itself is also interesting. You enter through a gateway in the medieval fortifications in Place André Audinot, part of a 13th century castle which forms a dramatic contrast with the simple lines of the modern architecture of the principal museum building and the adjacent lake.

We recommend you visit this museum when in Péronne - indeed it is the main reason to visit Péronne in the first place.

Before leaving the town be sure to take a stroll along the banks of the Somme river, for example on the Boulevard des Anglais, to enjoy the views and peace. The landscape of the region is characterised by this river and the many islands and lagoons in and around Péronne.

About 30 minutes drive north-west of Péronne we suggest you visit the memorial tower at Thiepval. This is a very interesting site and as well as the memorial you can see recreations of trenches and see the area where some of the most fierce fighting took place during the First World War.

Map of Peronne and places nearby

Visit near Peronne with France This Way reviews

Plan your visit to Peronne, Somme

Regular market(s) are held in Peronne each Saturday. (Markets are held in the morning unless stated.)

The French version of this page is at Peronne (Francais)