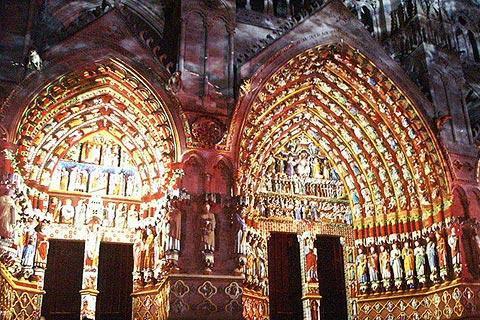 Amiens Cathedral is found in the town of Amiens, 120 kilometres north of Paris in the Somme department of Picardy. It is a gothic style cathedral that replaces an earlier Romanesque cathedral on the same site, that had been destroyed by fire in 1218.

An important structure within France, the cathedral is a listed National Monument.

The cathedral was originally built in wood at the time of the Franks, but was burned by the Normans. Rebuilt in 1019 it burned again in 1107 - then rebuilt again in 1152 and dedicated to the 'Virgin and San Fermin' - but this burned down completely in a terrible fire in 1218. 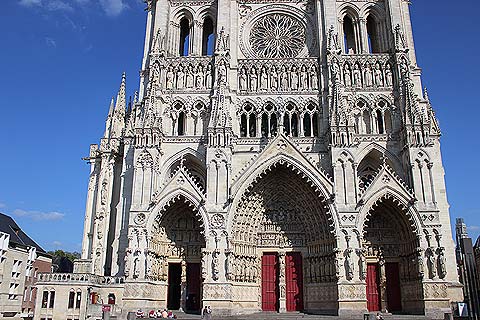 Work on the current Amiens cathedral started in 1220 and was completed around 1266, although most of the documentation concerning the building work was lost during two fires - one in 1218 and one in 1258. The labyrinth was added in 1288. The architect Robert de Luzarches began the work, which was continued from 1259 by Thomas de Cormont and concluded at the time of Bishop Bernard d'Abbeville by Renalut ( the son of Thomas de Cormont).

Amiens cathedral is the tallest cathedral in France, and also the one with the most interior space.

The cathedral has some outstanding sculptures, and (apparently) the head of John the Baptist, that was brought to Amiens from Constantinople after the Fourth Crusade. The most notable sculptures are those on the front facade of the cathedral, and those in the south transept. The floor of the cathedral also deserves a special mention - a spectacular inlaid floor with a multitude of different designs.

The structure of Amiens cathedral

The main facade is 48 metres wide and 70 metres high, has three ogival arcades and is adorned with a remarkable number of statues and low-reliefs representing the stories of the Bible. Above the arcades run two galleries with gigantic statues of the Kings of Judah.

The large towers were built between the 14th and 15th centuries; the tower on the north door has the statue of St. Fermin while the buttresses have pictures of Jesus Christ, the Virgin and the Apostles.

The Central Portal, called 'the Saviour', has a substantial statue (2.5 metres high) of the 'Saviour blessing'; and below there is the statue of David. In the tympanum there is a whole succession of men, angels, saints, stars (a real 'Bible of stone'), with the figures at the centre of St. Peter and St. Paul. Under the lower stylobate there is a mosaic symbolically depicting virtues and vices.

Also noteworthy are the statues of the Prophets (Isaiah, Jeremiah, Ezekiel and Balthasar) and others. This is an exceptional story of the Bible, which may symbolically represent the Triumph of Faith, the evangelization of the world.

Equally significant is the portal to the right, called 'the Mother of God', with the child and the snake at the foot. Next is the story of Adam and Eve and the whole story of Christ’s life; everything is surrounded by an extraordinary sequence of Saints, Angels and Prophets.

On the Portal of San Fermin you see stories of the Saint martyr. On the southern portal there is the story of St. Honore, and, on the north, other stories of the Virgin’s life are represented (the Annunciation, the Visitation, the Birth of Jesus).

The inside of Amiens cathedral is in the form of a Latin cross, nearly 135 meters long and about 60 metres wide with 42 columns supporting the vaults at a height of approximately 40 meters.

The great beauty of the interior is also due to the windows and glass, again representing stories of the Old and New Testament. The Central Window stands out for the the figure of Bishop Bernard d'Abbeville, and the Virgin with the child, surrounded by four angels bearing a crown.

Sculpture is predominant in the cathedral, both outside and in richly decorative chapels, repeating the evangelical themes of the of lives of the Saints, especially of Saint Firmin. In Gothic art painting plays a minor role compared to sculpture; in their place we see glass windows, miniatures, ivories, gold jewellery and stained enamels. 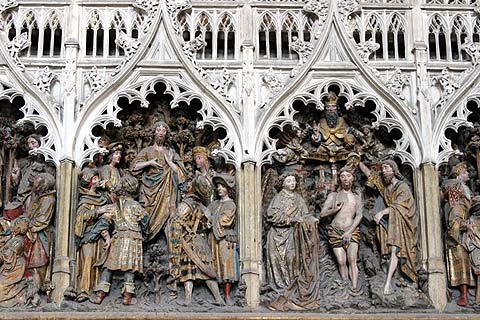 Although the famous French cathedral is the main attraction in the town, you will also want to explore the centre of Amiens while you are here, to see the canals, the parks and gardens. See the Amiens guide for details.

Map of Amiens cathedral and places nearby

Visit near Amiens cathedral with France This Way reviews

The French version of this page is at Amiens cathedral (Francais)