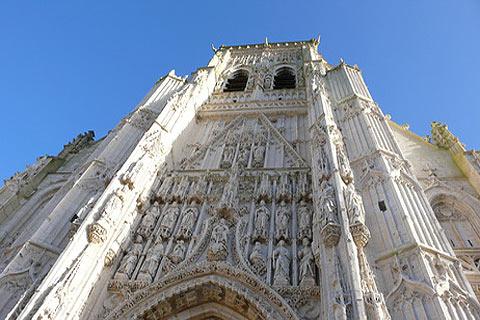 The village of Saint-Riquier is towards the west of the Somme department in Picardy, surrounded by the flat landscape typical of the region and just a few kilometres east of the important town of Abbeville.

The places of interest in Saint-Riquier are all close to the village centre, where you will also find place to park the car, so exploring is straightforward. Best known for its abbey church, Saint-Riquier also has several other monuments to see and is an interesting place to visit. It is also now an important music centre with an important music festival held in the abbey each summer.

Your first port of call will be the benedictine Abbey Church, built in the gothic flamboyant style in the 12th century and recently restored. It is one of the best examples of this style of architecture to be found in Picardy.

Before entering the church spend some time admiring the carving of the facade, especially the ornate carvings of Jesus, Mary and the apostles and other figures around the doorway. Also outside you can explore the pleasant gardens around the church.

Inside around the nave area you can see more impressive examples of decorative stonework. The inside is also notable for the large amount of light that the flamboyant gothic style allows to enter the building. The choir area, from the 13th century, contains some carved wooden stalls added in the 17th century and both here and in the chapels around the edges of the church there are decorative element in ironwork, paintings and statues.

Before leaving the abbey be sure to visit the treasury which contains numerous artefacts of interest including statues, paintings of Saint Riquier and Saint Marcoul and several religious items in copper as well as two 16th century wall paintings together representing "Dit des trois morts et des trois vifs".

The "Dit des trois morts et des trois vifs" is a medieval theme found in several churches across Europe which shows three 'living dead' people talking to three wealthy people, generally thought to be warning them of what the future holds for all of us.

The abbey also contains a museum with items explaining rural life in Picardy over the centuries. The extensive building next to the abbey and which once formed part of the abbey complex, is now used as a cultural centre.

The current belfry in the centre of Saint-Riquier was built in the early 16th century on the site of an even older belfry that had been destroyed under orders from Louis XI. It is a very substantial square stone tower with small round towers in each corner.

The Hotel Dieu, a medieval hospital where nuns once tended the sick, is next to the abbey church and one of the most attractive buildings in the village. It was built at the end of the 17th century and includes a cloisters and a small chapel.

Close to the belfry you can see the Maison Napoléon with a design that represents Napoleon's hat and is surmounted by a statue of Napoleon. Elsewhere in Saint-Riquier there are small remains of ancient towers and walls that once defended the town such as the 'Tour du Noch' and the 'Tour Saint-Jean'.

Also interesting to those with a sense of local history is the site of a vaulted room at la ferme de Drugy, where a fortified castle once stood and where it is said that Joan of Arc passed a night in November 1430 when she was a prisoner of the Burgundians on her way to be transferred to the English. The farm is private property - ask in Saint-Riquier tourist office for contact details to request the chance to be shown the room.

A very pleasant way to explore the countryside here is to follow one of the numerous trails in the Forest of Crecy, one of the largest remaining ancient forests in the Picardy region. The forest also includes about 25 trees that are officially listed as 'remarkable trees'. You can find details of these trees and the trails in the local tourist offices.

The towns of Abbeville and Amiens both also contain monuments of interest, in particular the cathedral at Amiens, and are within easy reach of Saint-Riquier.

Map of Saint-Riquier and places nearby

Visit near Saint-Riquier with France This Way reviews

Plan your visit to Saint-Riquier, Somme

The French version of this page is at Saint-Riquier (Francais)