Valloires is an abbey in Argoules, a small commune in the Somme department of northern France, to the north of Abbeville.

Although the Valloires abbey we see today was the part that was rebuilt in the 18th century, there has been an abbey in the same location since the 12th century: the cistercians established their original settlement in 1258, and had more than 100 monks here during the 12th and 13th centuries.

The abbey was then to have a difficult few centuries, being attacked first in the Hundred Years War of the 14th century, again by the Spanish and the protestant Huguenots in the 16th century, and then by the Imperial Roman forces of eastern Europe in the 17th century. As a result little remained of the 12th century origins of Valloires abbey at this time except for the church. 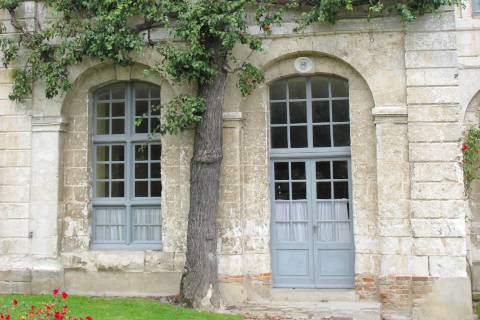 Valloires abbey was rebuilt in the first three decades of the 18th century. Unfortunately, a few years wfter work was completed the original church collapsed so a new church was also built, with work completed in 1756.

After the revolution the abbey passed into state ownership and was soon bought by a local landowner, then in the early 19th century his family sold it to a group of Catholic priests from Belgium, the Congregation of Saint Basile.

Being built in the mid-18th century it is no surprise that the baroque style was used for the church, in particular the decorative version of baroque called rococo, although the exterior is in a very austere neo-classical style. There are various things of interest to see inside the church, such as the altar area, the stalls, the organ and several statues, although overall it gives the impression of being rather austere, even on the inside.

The other buildings of the abbey are grouped around a large cloister with stone arcades at ground level and red-brick used for the upper level.

The abbey is also now run as a hotel, so you have a rare opportunity to stay in a cistercian monastery: most of the rooms have views on the gardens or cloister and not all the rooms are of monastic simplicity! See stay at Valloires abbey for details and bookings.

Various musical events are organised at Valloires abbey during the course of the year, so check for information at the time of your visit.

If you enjoy visiting gardens, the Jardin des Lianes is not far from Valloires abbey, and the village of Montreuil-sur-Mer is one of the most charming in the region, and if abbeys are your interest there are many other abbeys in France.

Map of Valloires abbey and places nearby

Visit near Valloires abbey with France This Way reviews

The French version of this page is at Valloires abbey (Francais)