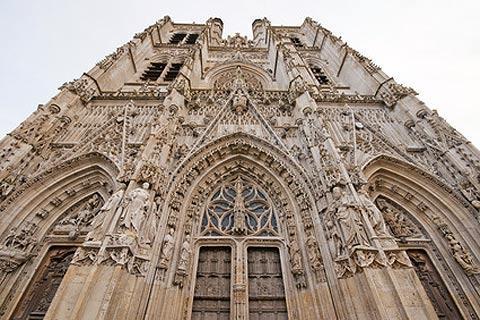 Abbeville is an important town in the Somme region of Picardy (north-eastern France) between Amiens (to the south-east) and Le Crotoy on the coast to the west. It is the proximity of Abbeville to the Bay of Somme that also attracts a good number of visitors here.

Before you start exploring you should recall that Abbeville suffered from very extensive damage during the Second World War so you should be aware that often when looking at historical monuments you will be looking at post-war restoration work to a significant degree, including the collegial church itself.

The Collegiale Church of Saint-Vulfran is much the most impressive monument in Abbeville. The church was built in the flamboyant gothic style in the 15th century and is especially renowned for its ornately decorated facade. The facade has been substantially cleaned and restored and is now quite a magnificent sight. 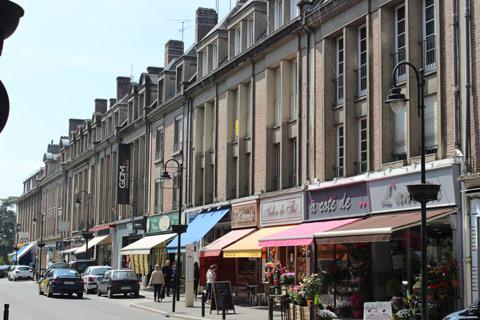 Inside the church the soaring stone columns and arches are also impressive, while the most interesting furnishings are a colourful carved wooden altarpiece depicting the story of the nativity, and another depicting Saint John baptising Christ. There are some wonderful paintings in the church as well, painted in a fairly modern style.

The collegiale church is not the only site of interest in Abbeville so allow time to explore during your visit.

The belfry, an imposing square stone tower (very much restored) is listed as a heritage site by UNESCO as one of a group of 32 belfries that are situated across northern France and Belgium. The belfry now contains the Abbeville Museum of Fine Arts, with collections of archaeological artefacts and also arts from medieval times to the 19th century.

The museum is named after Jacques Boucher-de-Perthes, one of the first people to discover the science of prehistory in the 19th century, for example by the discovery and study of prehistoric stone tools. It was his collection around which the museum was first created.

The Church of Saint-Sepulcre is visited in particular for its contemporary stained glass windows by Alfred Manessier, added in the 1980's to replace those that disappeared during the war, but be sure to pause to look at the gothic style facade on your way in! The windows are exceptionally colourful, and it is said the artist was inspired by the lighting across the landscapes of the bay of Somme.

Another nice part of Abbeville is the Jardin d'Emonville established around a large mansion. The park has been attractively gardened and offers a nice tranquil area to relax.

While in Abbeville a visit to the Chateau de Bagatelle is also recommended: the castle: it is a 19th century castle (more of a grand manor house really in my opinion) surrounded by formal gardens in the French style and extensive parkland.

Also be sure to visit the 'Jardin de la Plume' on the edge of town. This is one of our favourite gardens in France. We also enjoyed a walk in the peaceful setting of the less formal Parc d'Emonville. Unfortunately we didn't have a chance to explore the Parc de la Bouvaque (it was raining) but were told that it has a good number of ponds and different natural environments and is a good place for nature lovers to explore. 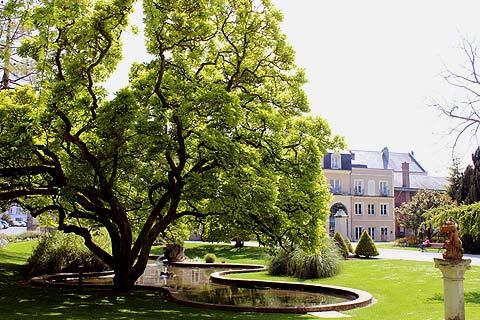 Most excursions in the region will be towards the coast, perhaps to the resorts and excellent beaches such as those at Le Crotoy or Fort-Mahon-Plage, or to explore the substantial protected natural reserves around the Bay of Somme.

We also suggest a visit to the abbey and belfry at Saint-Riquier, a short distance to the north-east of Abbeville, and the medieval centre of Saint-Valery-sur-Somme, to the west on the Bay of Somme.

Map of Abbeville and places nearby

Visit near Abbeville with France This Way reviews

Plan your visit to Abbeville, Somme

Regular market(s) are held in Abbeville each Thursday & Saturday. (Markets are held in the morning unless stated.)

The French version of this page is at Abbeville (Francais)