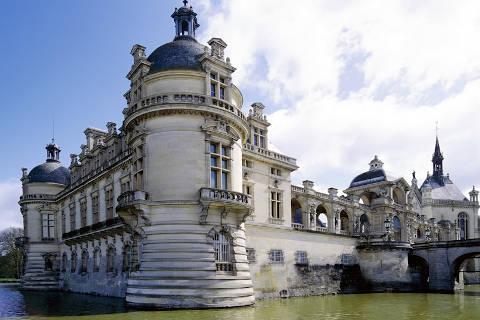 Although it is not one of the most visited departments in France, the Oise has a good number of historical and religious monuments and castles to discover, impressive scenery represented by large forested areas, and very popular theme parks.

The Oise department is situated in the Picardy region of northern France just a short distance north of Paris, which make the department a popular destination with Parisians escaping the city for the weekend exploring the forests and countryside trails.

It falls roughly into three parts, with the Senlis region to the south-east, Compiègne to the north-east and the area around Beauvais to the west. The east receives the majority of the visitors to the department.

Apart from those attracted here by the theme parks such as Parc Asterix, most visitors come to the region to see the historic monuments, in particular the castles, cathedrals and churches, or to enjoy the countryside.

Several of the castles in the Oise also have impressive gardens (officially listed as 'remarkable gardens'), such as those at Chantilly (both the Potager des Princes and the castle gardens), and the gardens of the castles at Compiegne, Senlis and Vez.

You will also discover interesting villages as you explore the Oise department, the most picturesque among them with attractive churches, traditional village streets or half-timbered buildings.

Many visits to the Oise will include a trip to Beauvais, the 'capital' of the department and best known for its important cathedral.

The pretty village of Gerberoy, classified among the 'most beautiful villages of France, is  situated in this part of the department, and we suggest you also visit the neighbouring villages of Lachapelle and Songeons while you are here.

If you are exploring a little further south we suggest you also explore the villages of Chaumont-en-Vexin, Reilly and Montjavoult.

In the north-east you can first visit the important regional cathedral in the town of Noyon.

A little way south, the town of Compiegne also has several historical monuments, and the town is often visited for the Compiegne Forest, south-east of the town, which is a popular leisure destination and also well known as the place where the armistice was signed at the end of the First World War

In the forest you can visit a replica of the rail carriage where the armistice was signed (the original was taken to Germany when France were defeated in 1940, and subsequently destroyed by bombing).

The Chateau de Compiegne is a popular attraction near the town itself, while to the east of Compiegne you should visit the Chateau de Pierrefonds, one of the most attractive in the Oise - and the village of Pierrefonds itself. Another village of interest not far from here is at Saint-John-au-Bois, set in the heart of the forest, and very close to Pierrefonds you can visit the Abbey of Morienval, one of the best preserved roman style churches in the region

The ruins of the Abbey of Notre-Dame d'Ourscamp are also scenic, especially during the early summer when the surrounding gardens are at their best.

Visits to the south-east of the Oise are usually centred around Senlis , best known for its cathedral.

The adjacent Oise Regional Natural Park covers a substantial part of the south-east of the department around Senlis and provides many opportunities to enjoy the lakes and forests of the region, and is often the focus for visitors to the department. Numerous marked trails cross the park.

Another very popular destination here is the Chateau de Chantilly, one of the scenic highlights of the region, and we also suggest you visit the classical style 18th century Chateau d'Ermenonville.

Abbeys are also well represented in the Oise and among the most interesting in this part of the region are those at Royaumont (on the southern border with Val d'Oise); the ruins of Chaalis Abbey; and the substantial Moncel Abbey at Pontpoint, dating in part from the 14th century and very well maintained.

No visit to any part of France is complete without a stroll around the local villages, and here in the south-east we recommend the cluster of villages that includes Saint-Jean-aux-Bois, Saintines, Montepilloy and Ermenonville.

Theme parks in the Oise department of Picardy

Although we have left this section to last we should point out that the most popular attraction in the Oise, that gets about the same number of visitors per year as all the other tourist destinations put together, is the theme park at Parc Asterix!

Parc Asterix is based around the much loved cartoon character called Asterix and the theme park has all the exciting rides etc that you would expect and is just 30 km north of Paris.

Another adventure park in this part of the Oise is at Ermenonville and is called La Mer de Sable - the park is an adventure experience for children based largely around an extensive sand dune that enables 'wild-west adventures'. La Mer de Sable is the second most visited attraction in the Oise.

A third family-oriented parc with lots of attractions, spectacles, rest areas etc can be visited at Parc Saint Paul (near Beauvais).

Among the museums in the Oise, the 'Living Museum of the Horse', situated in grand stables near Chantilly and dedicated to everything related to horses, is very popular.

Other museums include the departmental museum at Beauvais, one dedicated to Mother of Pearl at Méru, and small museums at Compiegne (the Museum Antoine Vivenel, dedicated to art and archaeology, especially Greek ceramics, and the Museum of the Second Empire) and at Creil (the Museum Gallé Juliet, focus on decorative ceramics).

The towns of Chantilly (well known for its horse associations and races) and Noyon have both been listed as 'towns of art and history', and three towns here have been awarded the maximum 4* as 'towns in bloom': Beauvais, Mureaumont and Remerangles.

Map of Oise and places nearby