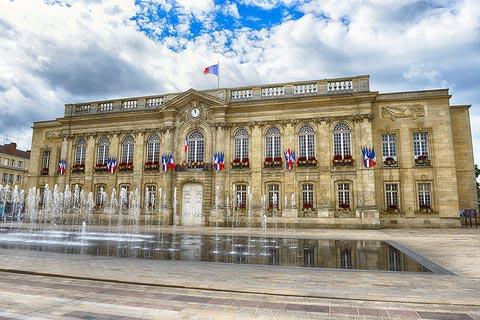 Beauvais is a large town about 75 kilometres north of Paris, in the direction of Amiens. It is the 'capital' of the Oise department.

France This Way comment: the ancient centre of Beauvais was severely damaged during the Second World War, but in the town there remain some interesting monuments and buildings to discover.

Your visit will focus in the area around the cathedral and the Town Hall. As you walk around Beauvais you will notice metal markers set in the pavement that denote the places of interest - visit the tourism office for an explanation of what these refer to.

The Cathedral of Saint Pierre in Beauvais has had a long history of problems due to over-ambitious plans and various disasters: the choir was destroyed by fire in 1225 and rebuilt over the following decades; a large part of the walls collapsed in 1284; the transept was added in the 16th century then followed by a very large tower (rather than a nave which should have been built first to increase the strength of the building) that collapsed less than five years later. 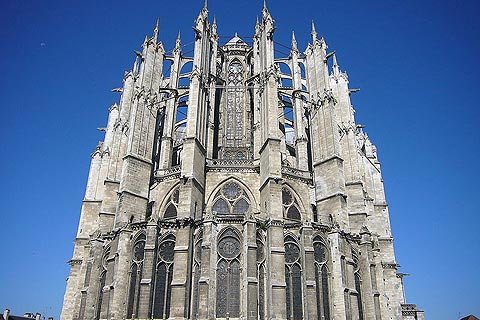 The tower was never rebuilt and the nave was never constructed, but the existing cathedral is already very large.

Even recent years have brought further problems. After the revolution many of the statues were damaged, then the cathedral was further damaged in the second world war. In the late 20th century the choir, that was left standing when much of the rest of the building collapsed in 1284, started to collapse itself. Major reinforcement work is ongoing.

Despite this the cathedral of Saint Peter remains the highlight of a visit to Beauvais and is a substantial gothic style building mostly dating from the 14th-16th centuries and with some interesting carvings and stained glass windows to enjoy. The 19th century astronomical clock is also interesting and is said to be the largest of its type in the world (it has more than 50 dials to try and understand)! The cloister also retains several stone arches.

You can also visit the church of Saint Etienne, to see an interesting mix of roman and renaissance style architecture and the attractive 16th century stained glass windows. While most of the church dates from the 16th century, there are parts of the original 12th century roman style church, and the large tower was only added in the late 17th century.

There is also a scattering of medieval houses to be seen in streets around the cathedral and the town hall, for example in the Rue d'Alsace. A particularly interesting group of buildings is the 'maladrerie' where monks looked after the sick at 203 Rue de Paris. You can see the dormitory, chapel, barn and various other associated buildings.

The classical style town hall dates from the 18th century. The statue in front of the Town hall is of Jeanne Hachette, a local hero who led the battle to save Beauvais from being captured during a siege by the Burgundy dukes in the middle of the 15th century.

There is a museum in Beauvais celebrating its important historical role in the rug and carpet industry, at the 'Galerie Nationale de la Tapisserie de Beauvais'. The museum is found in a modern building next to the cathedral.

The departmental museum for the Oise department is in the old Episcopal Palace in Beauvais: this is a very impressive building so you should visit even if you do not want to explore the museum. 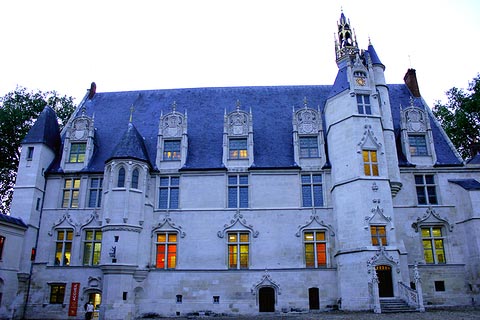 One of the most popular theme parks in France is a short distance west of Beauvais at Parc Saint-Paul.

About 20 kilometres north-west of the town you can visit the village of Gerberoy, classified among the 'most beautiful villages in France'.

Map of Beauvais and places nearby

Visit near Beauvais with France This Way reviews

Beauvais is classified as a village in bloom (ville fleurie) 4*

Plan your visit to Beauvais, Oise

Regular market(s) are held in Beauvais each Wednesday all day & Saturday all day. (Markets are held in the morning unless stated.)

The French version of this page is at Beauvais (Francais)