The small village of Chiry-Ouscamp is in the Oise department of northern France, along the banks of the river Oise. A settlement was established here as early as the 7th century, and the village attracts visitors today mostly because of the ruined cistercian abbey that is found here.

France This Way comment: although the original abbey church at Ourscamp is in ruins, these are quite substantial and surrounded by parkland which make for a pleasant and evocative visit. 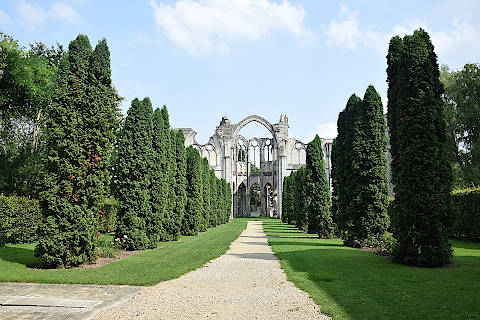 The original abbey complex was founded at Ourscamp by cistercian monks in 1129 when it was built on the site of a 7th century oratory. The abbey was burned in 1358 during the Hundred Years War. Additions were made in the 17th and 18th century, and many of these convent buildings are in good condition and can still be seen, although they are less interesting than the 12th century buildings.

For a long time Ourscamp abbey was among the most important abbeys in the north of France. More than 500 monks lived here and they owned a large amount of land in the region.

Monasteries in France were closed after the Revolution and the abbey at Ourscamps had several other uses such as a hospital and a factory. In 1798 a large part of the nave was demolished so that the remaining parts would create a more 'romantic setting'!

In the second half of the 20th century the building was re-established as an abbey. Although the nave has disappeared from the abbey church a large amount of the walls from the choir end can still be seen, such as the gothic style windows. The position of the original nave is now a tree lined approach to the abbey church.

Other buildings such as the monks infirmary can also be seen. This chapel has an altar and has retained its roof which is a lovely example of columns supporting a ceiling in stone.

On one wall you can see a carved representation of a bear, also added as part of this transformation. This is because of a legend that Saint Eloi, who founded the original oratory here, had managed to tame a bear that came to the abbey to attack a bull pulling a plough.

The other abbey buildings such as the living accommodation (the logis abbatiale) that you see today at Ourscamp are much more recent: they were added in the 18th century. There is also a park that surrounds the abbey. 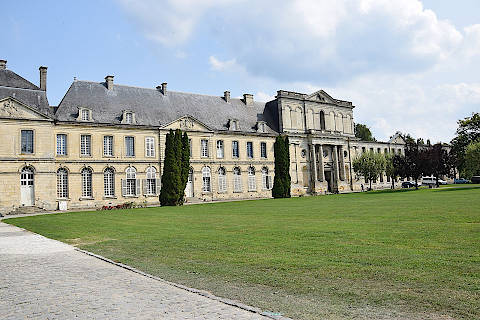 Places that you can visit close to Ourscamp include Noyon to see the cathedral, Pierrefonds to see the pretty village, the town of Compiègne with its historic buildings, and see also other abbeys across France.

Map of Ourscamp abbey and places nearby

Visit near Ourscamp abbey with France This Way reviews

The French version of this page is at Ourscamp abbey (Francais)