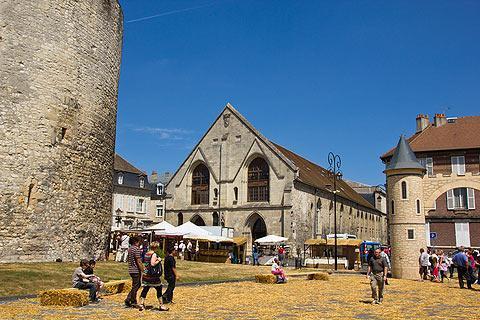 The important regional town of Compiègne is not particularly well known by tourists, but you will find there are a good number of sites and places of interest both in and near the town. It is situated north-east of Paris, in the heart of the Oise department of Picardy.

It was in a train carriage here at Compiègne that the armistice to end the First World War was signed.

There is a great deal to see in Compiegne including an imposing palace and park, several historic buildings and important museums. Many of the places that you will want to visit are in and around the palace so that is where we suggest you start your trip.

Although we usually associate the Kings of France with the castles along the Loire Valley, the Palace of Compiègne was also a very important focus for the Royal family before the revolution, especially Louis XVI. This role was later carried on by Napoleon who substantially enhanced the palace and it is the Napoleonic period that dominates your visit. 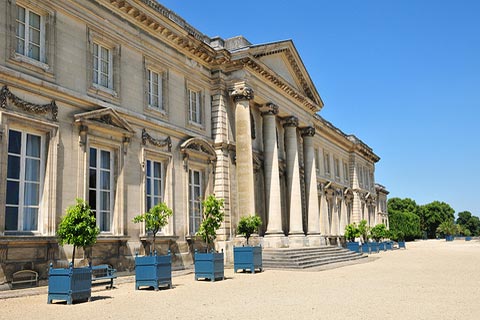 The tour of the inside of the castle passes through three important parts:

After exploring the Palace of Compiegne you will certainly want to also explore the gardens - indeed you might well think them the highlight of your visit! In contrast to the royal castles such as Villandry and Versailles to the west of Paris with their formal French style gardens, here at Compiegne you will discover beautiful gardens in the 'English style' and enjoy a long broad walk through the parkland that continues in a straight line for five kilometres to Les Beaux Monts.

We thought this 'English' style of garden must be a recent addition here but apparently it is pretty much as it was originally laid out in the middle of the 18th century.

There are numerous statues and interesting plants and trees as well as plenty of places for a picnic in the Palace grounds which are officially listed as a 'remarkable garden'.

There are more places of interest in the town centre of Compiegne. Start perhaps in front of the 16th century Town Hall, and a chance to admire the gothic style facade. This is really a very impressive sight, with numerous decorative statues including a central statue of King Louis XII on horseback and a large central clocktower with some colourful statues that strike the hours.

As with many towns in the north of France, Joan of Arc played a role in defending Compiegne and you can see a statue commemorating the battle in front of the Town Hall.

Very close to here you can find Compiegne tourist office and also the Museum of Historic Figurines (Musee de la Figurine Historique). In the museum it was very interesting to see the large number of recreations in miniature of battles across the centuries with the Battle of Waterloo the most important. If nothing else you have to admire the time and effort that has gone into preparing these elaborate recreations. 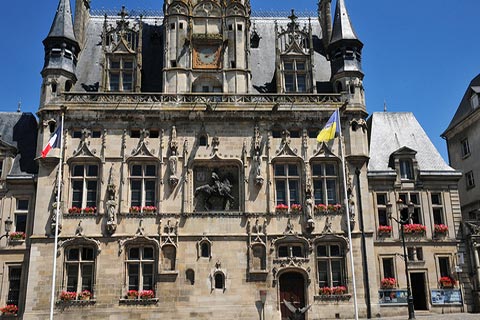 Among the most important religious monuments in Compiegne are:

You can also see a medieval half-timbered house called the Vieille Cassine at the end of Rue des Lombards, and others next door and close by such as the Maison "Le Bouchon" on rue d'Austerlitz. Another building that we found interesting was the Hôtel-Dieu Saint-Nicolas-du-Pont on Rue Jeanne d'Arc. A hospital from the 13th century until the First World War, the Hotel-Dieu contains a small chapel.

Yet another sight worth visiting is the remaining part of the medieval ramparts where you will enjoy a stroll through the Jardin des Remparts. The substantial stone tower called the "Grosse Tour du Roi" was the castle keep that formed part of these original town defences.

The Forest of Compiegne to the south-east of the town is very attractive, very popular with locals and visitors alike, and there are seemingly endless paths, trails and cycle paths to explore in the forest.

The most visited destination in the forest also brings a rather sombre note to your visit. The Armistice Memorial commemorating the end of the First World War incorporates a substantial memorial, a museum and an exact replica of the train wagon where the armistice was signed in 1918 (the original wagon was destroyed by the Germans during the Second World War).

Slightly less well known, it was also here that the French signed a truce with the Germans following their invasion in 1940. 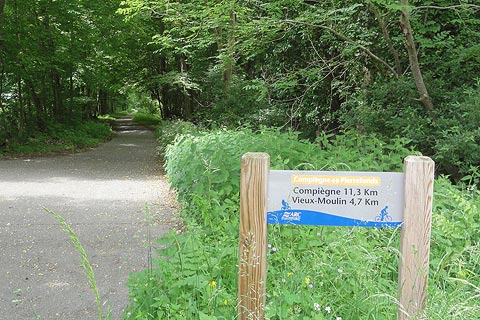 Another emotive destination in Compiègne is the Memorial of Imprisonment and Deportation (Mémorial de l'Internement et de la Déportation), the Camp de Royallieu. This site of a Second World War prison and deportation camp, very unusual in France, is now a chance to reflect on the lives of those deported and to get an impression of what the conditions were like here during the war. As well as the main exhibition rooms be sure to visit the Jardin de la Memoire which is very well planned.

At first appearance the Chateau de Pierrefonds looks like a particularly impressive medieval castle but is actually a "fairytale" castle built for Napoleon in the middle of the 19th century on the ruins of a much older castle, with a great deal of attention to recreating the appearance of an older castle. Despite this 'fakery' it is still great fun to visit. See Chateau de Pierrefonds.

If you know Carcassonne in the south of France you might see certain similarities with the Chateau de Pierrefonds. Carcassonne was also in ruins until Viollet-Duc, the 19th century architect and restorer of ancient buildings, took responsibility for the town. For the same reasons, Carcassonne is also 'accused' of being a sort of 19th century idea of how a medieval castle should be rather than a faithful recreation.

Map of Compiegne and places nearby

Visit near Compiegne with France This Way reviews

Plan your visit to Compiegne, Oise

Regular market(s) are held in Compiegne each Wednesday & Saturday. (Markets are held in the morning unless stated.)

The French version of this page is at Compiegne (Francais)