The village of Morienval is in the Nord department of northern France, to the west of Soissons and east of Senlis and Chantilly. The centre of the village is dominated by the Abbey of Notre-Dame, which is the principal reason that visitors come here.

Discover the Abbey of Morienval

France This Way comment: because it has retained a great deal of Romanesque architecture as well as having parts from later periods, Morienval abbey church is interesting to visit, especially if you are an enthusiast of religious architecture. The park and rose garden is also a highlight of a visit.

Although it is mostly in the roman style, the church was built as architecture started to incorporate gothic elements so these can also be seen here. 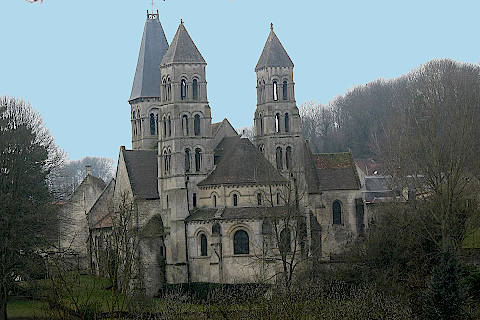 The abbey was closed in 1745 but the abbey church is still used as the village church for Morienval. Most of the other abbey buildings were demolished after the revolution or are now in private ownership.

The abbey was founded as a womens Benedictine settlement in the 9th century and building is thought to have started in 920 AD. The current building dates from the 11th century, although you can also see parts of the church that were constructed in the 17th century as well as elements that were changed during an extensive renovation in the 19th century (the principal goal of the renovation was to restore the church to its 12th century origins where possible).

Walk around the outside of the church before you go in: the rear with the chevet and two 11th century towers is one of the highlights of the church.

There is a main tower at the front of the building, and two similar but smaller towers to the rear: the main tower has two rows of bay windows and the rear towers have three rows. To the left of the main tower there is an entrance added later to the building in the renaissance style that incorporates three statues inset in the walls with columns either side.

Although the abbey is predominantly in the roman style, there are several elements, such as the ribbed vault structure of the ceiling in the ambulatory that incorporates keystones, that are from the 11th century and the beginning of the gothic style: this is one of the earliest examples of the transition from the roman style to the gothic style of architecture, which makes the building interesting to architects and students of religious architecture.

The rear of the church, where you can walk around the chevet and is called the ambulatory, is particularly noteworthy with several series of arches and columns with carved capital stones beneath a row of windows.

In various places in the church you can see carved capital stones (these are the decorated stones at the top of the columns), in particular in the sides of the nave. These are beautifully carved and are said to include designs from the Celtic and Merovingian periods that had ended before the church was built.

There are also about ten statues in the abbey church at Morienval, most of them painted and typically from the 16th and 17th century, and a burial slab (gisant) of Florent de Hangest. 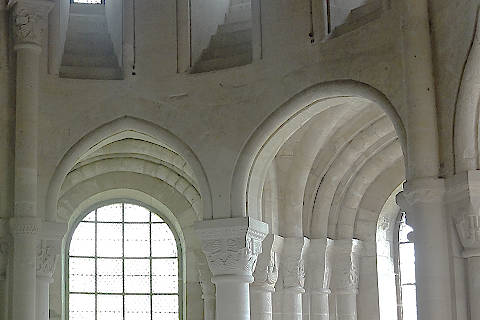 Garden and roses at Morienval abbey

Outside the abbey church there is a lovely area of grass and park and an exceptional rose garden - many visitors will find this more interesting than the church, I suspect - so if you can visit during the season when roses are in flower that is preferable.

The David Austin rosery is the first official rose garden celebrating David Austin roses to be established in France and has thousands of roses in about half a hectare of garden. You can also buy roses and other garden related products - and if you are really lucky you can get married in the abbey church then have a reception in the rose garden!

Outside the village towards Pierrefonds you can see the ancient priory of Saint-Nicolas de Courson and on the edge of Morienval there is a another religious monument, the small chapel of Saint-Anobert.

The village of Pierrefonds, just a few kilometres from Morienval, is a picturesque village with one of the most impressive castles in the region. See more abbeys in France.

Map of Morienval abbey and places nearby

Visit near Morienval abbey with France This Way reviews

The French version of this page is at Morienval abbey (Francais)