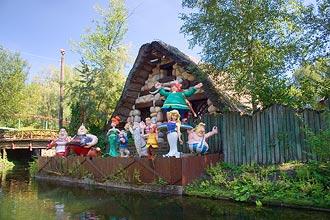 Planning a trip to France with the children but don’t know where to go? Looking for theme park excitement in Europe to rival that of America?

Then why not visit Paris – not only is it one of the most beautiful cities in the world, but it also has two great theme parks nearby, which children will love. Enter the cartoon world of Gaul at Parc Asterix or mingle with Mickey, Minnie and company at Disneyland Paris.

This quintessentially French theme park brings to life one of France’s most popular comic book cartoons of all time – Asterix de Gaul, a small and quirky warrior living in Armorica in 50 BC, in the only part of Gaul not to be conquered by the Romans. The amusing stories in the comic books focus on Asterix, his kind-hearted and somewhat rotund best friend Obelix, and the local druid Getafix (Panoramix in French) who prepares magic potions for them.

The park is located approximately 30 kilometres (20 miles) north of Paris, north of Charles de Gaulle airport on the A1 Paris to Lille motorway in the south-east of the Oise department.

There are some exhilarating and hair-raising rides, all loosely based on a classical themes – there’s the Thunder of Zeus – the largest wooden rollercoaster in Europe, the swinging Roman galley ship, the Trojan horse and the death-defying Goudurix loop-the-loop ride, as well as flying chairs, log flumes and other popular theme park favourites.

There’s always plenty of entertainment going on when you want a break from the rides. Meet your favourite characters at the costume parade – they’re held several times a day, or go back in time to a Gaulish Village Festival, where there are lots of great activities and funny goings-on daily. The dolphin and sea lion show is captivating, and the Panoramix Magic Show will leave you spellbound. And that’s not all – there are several different stage performances throughout the day, in which Asterix and his friends get involved in great high jinks and adventures.

Being a French theme park, the food here is of course excellent and there’s a huge variety of eating places to choose from, whether you’re looking for breakfast, lunch, dinner or just a snack. There’s a great pizzeria, a tasty creperie and a delicious burger bar to name just a few. All the restaurants are themed too – there’s a medieval banqueting hall, a circus buffet in a colourful big top tent, a Gaulish tavern and a Roman villa.

You can get Asterix souvenirs in all shapes and sizes, from t-shirts and mugs to helmets and swords. There are stalls and boutiques all over the park, so you can get whatever you want, whenever you want. If you’re looking for other gifts and souvenirs, there are some wonderful shops selling Egyptian, Roman and Greek themed ornaments, crafts and clothes.

Hotel des Trois Hiboux is the only accommodation within the park itself, but it’s a wondeful place to stay and offers great value for money. The facilities in this three-star hotel are excellent – there’s a cosy lounge with a roaring fireplace, a games room for children and a bar with a terrace. Nearby hotels include Novotel, Kyriad, Campanile and Mercure, so you’ll never be stuck for somewhere to stay.

Disney’s only theme park in Europe is very similar in style to the parks in America. The Magic Kingdom comprises four different lands, all of which converge on Main Street USA – an early 20th century themed street with horses, trams and vintage cars. Fantasyland is a world of fairytales and is aimed at young children. There’s Sleeping Beauty’s castle, Snow White’s house and Alice in Wonderland’s maze. Peter Pan, Dumbo and Pinocchio also put in an appearance. Frontierland is a gold rush themed area with Pocahontas Indian Village, a shooting gallery, Big Thunder Mountain and Wild West legends all around. Adventureland sweeps you through marvellous exotic lands from Aladdin’s Enchanted Passage to the Pirates of the Caribbean lagoon. Discoveryland is a wonderful area of science and space.

All the most popular attractions from the American parks are recreated in Disneyland Paris. There’s the terrifying Space Mountain, the Mad Hatters’ Teacups, It’s a Small World, the Pirates of the Caribbean, Big Thunder Mountain and Indiana Jones and the Temple of Doom. 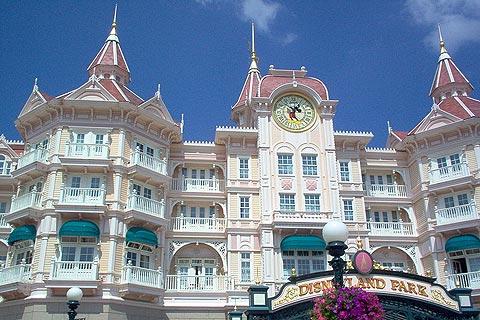 No trip to a Disney theme park would be complete without a parade where you can meet your favourite Disney characters. There are parades in various parts of the park all day, so you’ll never miss out. Some of the excellent stage show performances include The Lion King, The Tarzan Encounter and Winnie the Pooh and Friends Too.

Every zone has its own range of eating places to cater for all tastes and appetites at any time of day. Some of the best ones are Victoria’s Homestyle Restaurant in Main Street USA, which serves wholesome, traditional American dishes such as meat pie and chocolate brownies. The Cowboy Cookout in Frontierland is a mouth-watering barbeque restaurant with country music and dancing, while Buzz Lightyear’s Pizza Planet serves pizzas in an intergalactic atmosphere.

You won’t have any bother finding a souvenir of your favourite Disney character – there’s a huge selection of soft toys in many of the shops dotted around the park, from old classics like Winnie the Pooh to the space-age Buzz Lightyear. The shops in Discoveryland have some weird and wonderful scientific gadgets and gizmos, while Adventureland has exotic gifts and souvenirs from far-flung lands. Budding cowboys can kit themselves out at the Bonanza store in Frontierland, from Stetson hat to boot spurs.

It’s rather expensive to stay in the resort itself, although for a real treat it is very good fun. Disneyland Hotel on Main Street USA is the most expensive, while Davey Crockett’s Ranch is the cheapest option. The cosy log cabins are about quarter of an hour’s drive from the park. Other hotels outside the park include the Radisson SAS, Kyriad, Holiday Inn and Pierre et Vacances Hotel.