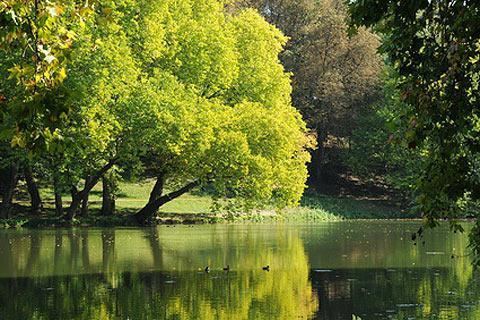 The village of Ermenonville is situated to the south of the Oise department of Picardy, about 40 kilometres north of Paris and on the southern edge of the Forest of Ermenonville. It is the combination of monuments and local attractions of the town itself and the surrounding natural environment that together combine to attract visitors

As you explore you will see several refences to the French philosopher Jean-Jacques Rousseau who spent a short period of time in Ermenonville before his death in 1778.

The principal attraction here in terms of visitor numbers is certainly the Mer de Sable Theme Park, but you should also take a look at the Chateau d'Ermenonville and the Park Jean-Jacques Rousseau. First, in the village, you should take a look at another local monument, the Church of Saint Martin.

This church has stood here since the 12th century, although very little remains of the original structure and much of what we see today dates from the 13th century to the middle of the 16th century, with substantial modifications during a 19th century 'renovation'. The entry door to the church is very impressive with stone carvings including five statues below a small rose window. 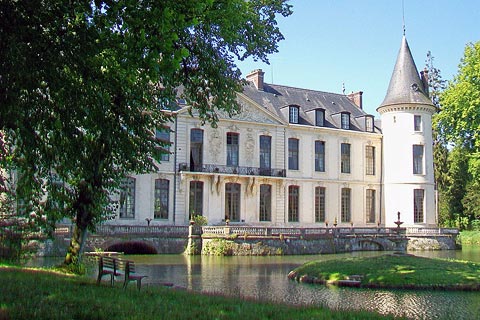 Although only built in the 18th century (as a substantial addition / replacement for a much older castle in the same position), so quite 'modern' in terms of French castles, the classical style Chateau d'Ermenonville is beautifully proportioned and in a lovely setting with views across the park.

The towers and moat that remain from the earlier castle and still surround the existing structure have been carefully integrated and contribute a great deal to the overall appearance.

However, the best way to see the castle today is to actually stay there, since it is now a hotel. See Chateau d'Ermenonville for booking details.

The theme park called the Mer de Sable is on the edge of the town (near Chaalis Abbey). It is one of the most visited attractions in the Picardy region and has the distinction of being the oldest theme park in France.

The unexpected environment - the park is based around Wild West activities due to the sandy conditions - arose because the heath that previously stood here had been removed over the decades, exposing the sand below.

The Mer de Sable parc has a good number of rides and activites, mostly quite newly installed and targetting younger children (up to about 12 or 13 years old). 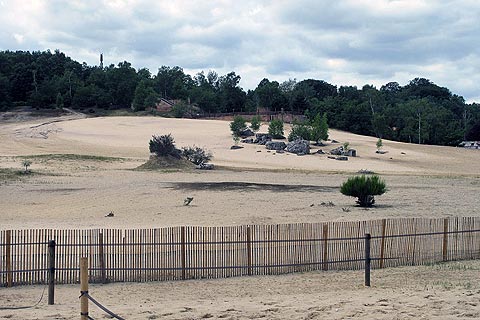 The Park Jean-Jacques Rousseau is very extensive, covering about 50 hectares (120 acres) and contains a wide range of landscapes, woodlands, ponds and lakes. There are also many man-made stone features to be discovered in the park including statues, buildings, tombs, benches...

In the western part of the park called the 'desert' you can see the cabin where Jean-Jacques Rousseau spent many days deep in thought when living at Ermenonville, and is now called the 'Cabane du Bonhommme' ('Cabin of the Old Chap') 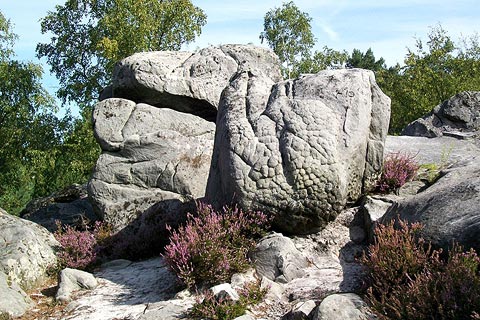 Providing ample leisure opportunities as well as hiking the Forest of Ermenonville also contains several places where you can see great boulders of granite in ususual shapes created by the weather, and viewpoints across the tree tops. The forest is crossed by the GR1 and GR11 long-distance 'Tour of Paris' pathways.

Map of Ermenonville and places nearby

Visit near Ermenonville with France This Way reviews

Plan your visit to Ermenonville, Oise

The French version of this page is at Ermenonville (Francais)