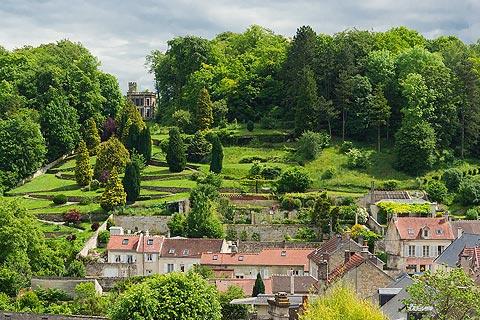 The village of Pierrefonds is on the south-east edge of the Forest of Compiegne between Soissons (to the east) and Compiegne (to the west) in the centre of the Oise department of Picardy.

Certainly best known and most visited for the Chateau de Pierrefonds, you will discover that the picturesque village is also very pleasant to explore and contains several other notable sights.

The castle is one of the most impressive - and photogenic - in the Picardy region and because of its multitude of spires and towers and its 'unspoiled' appearance it has been often used as a film set (including the recent Merlin television series). The castle has an interesting history, although not perhaps one you would guess at first glance.. 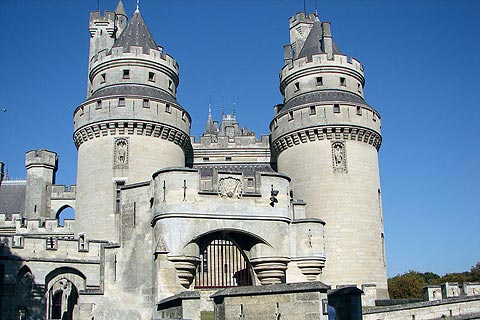 The original castle existed here as early as the 12th century, and was then replaced by a more substantial castle towards the end of the 14th century. This castle stood peacefully overlooking the trade route between Burgundy and Flanders until the early 17th century. The owner at that time was opposed to the accession of Louis XIII to the throne, which ultimately resulted in the castle being besieged and largely destroyed by Richelieu.

Two hundred years later in 1810 Napoleon I bought the ruins but circumstances prevented him doing anything with the castle. It was Napoleon III who was to instruct Viollet le Duc to reconstruct the castle, starting in 1857. It was specified that the castle should give the appearance of an authentic medieval castle and it was during the next 20 years that most of the castle walls and towers that we see today were built.

You will quickly forget you are not really in a medieval castle and just enjoy the visit!

The Chateau de Pierrefonds is now a National Monument. As well as exploring the large salons, the central courtyard, the donjon and the chapel you can also follow the walk around the parapet (the chemin de ronde) which gives you lovely views across Pierrefonds village and lake. One of the most curious architectural features you will notice is that while the outside has the appearance of a medieval castle, much of the interior and courtyard are designed in the much later renaissance style.

The castle is entered in the centre of Pierrefonds village. Entrance fee is around 7.50 euros.

Other attractions in Pierrefonds

During your visit to the castle you have already appreciated the lovely view across the village and the lake that dominates the centre of Pierrefonds. You can rent a pedalo and explore the lake, which is lovely because of the surrounding sceneray and the castle.

Just below the castle you will find the Place de l'Hotel de Ville with the Town Hall and the Pierrefonds Tourist Office. From here you can continue north to reach the lake and enjoy a walk through the village and along the edges of the lake. On the hill overlooking the northern edge of the lake you can see the impressive Chateau de Jonval

Throughout France you will see war memorials and Pierrefonds is no different. But take a second look at the monument in the Place de l'Hôtel-de-Ville: it is actually a monument to the nurses (Monument aux infirmières) who died on the battlefields during the First World War.

This particular location was chosen because a nurse called Élisabeth Jalaguier was killed here in 1918 by an enemy shell (obus).

Walk back into the main square and follow the rue Louis-d’Orléans towards the west. Here you can find the most important church in Pierrefonds, the Church of Saint-Sulpice. Built on the site of an 11th century church, most of what we see today is a 13th century reconstruction in the gothic style.

You will notice that the upper level of the belltower is in the renaissance style having been added in the middle of the 16th century. You may not notice that the choir section is a post World War I reconstruction (because of war damage) since it follows exactly the original design. To one side of the church you can also see the fortified door that originally controlled access to the priory.

Another building that has played an important role in the history of Pierrefonds is the Spa Water centre (établissement thermal) on rue Louis-d'Orléans that was a very popular attraction in the last part of the 19th century and early 20th century.

Another imposing building on the same road is the Charles-Quentin Institute, a substantial brick and stone mansion house surrounded by very extensive gardens (private property but you can look through the gate next to the church). 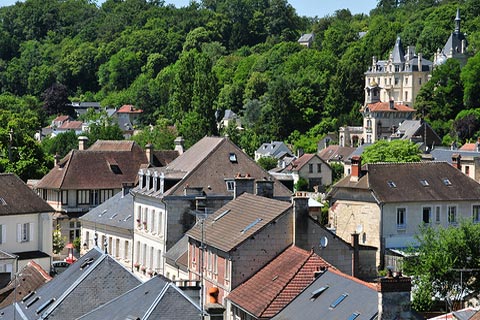 You will want to visit Compiegne with its palace and historic buildings, to the north-west of Pierrefonds, and Soissons to the east has an abbey and cathedral that you can visit.

Map of Pierrefonds and places nearby

Visit near Pierrefonds with France This Way reviews

Plan your visit to Pierrefonds, Oise

The French version of this page is at Pierrefonds (Francais)