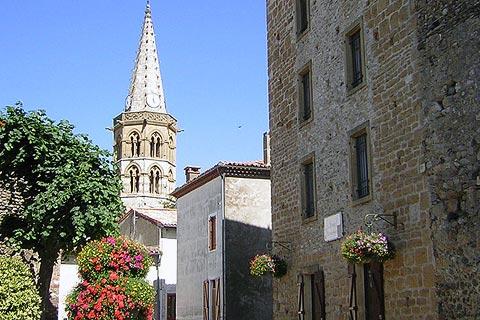 The village of Martres-Tolosane is a few kilometres west of Cazeres and about 60 kilometres south-west of Toulouse in the Haute-Garonne department of southern France.

Although it is only a small village, the centre of Martres-Tolosane is pleasant to visit and makes a possible detour when you are travelling south from Toulouse towards the Pyrénées. You will find most facilities here in the village. 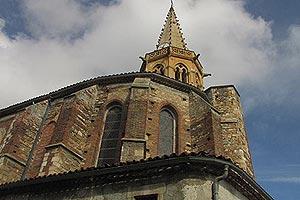 The first thing you will notice when you visit is the shape of Martres-Tolosane. The ancient centre of the village which includes the gothic style Church of Saint-Vidian and a small group of houses is surrounded by a circular tree-lined boulevard. Little danger of getting lost and easy to park!

The name Martres-Tolosane comes from the words "martyrs toulousains" that is, martyrs from Toulouse. This is because in an important battle here between the sarrassins and the christians the leader of the Christians, called Vidian, was killed along with several of his fellow soldiers.

The village also has a long-standing reputation for the pottery manufacturers that are to be found here - called the "Faïenceries de Martres-Tolosane", a tradition that stretches back to the 18th century.

There are several workshops and shops that you can visit in the village to admire or buy the hand-produced works.

2000 years ago it was here at Villa Charigan that one of the largest and most luxurious villas in the Roman Empire was situated. On the site a good number of Roman busts were discovered, most of which are now on display in the Saint-Raymond Museum in Toulouse (the principal Archaeology Museum in the region). There was also an ancient necropolis (burial place) here.

The best way to learn more about the interesting history of Charigan - Vidian - Martres-Tolosane is to visit the centre dedicated to the heritage of the village ("Centre d'Interprétation du Patrimoine Martrais") - ask for details at the Martres-Tolosane Tourist Office on place Henri Dulion.

A small village nearby that we particularly enjoyed exploring was at Rieux-Volvestre, a short distance to the north-east of Martres-Tolosane.

Map of Martres-Tolosane and places nearby

Visit near Martres-Tolosane with France This Way reviews

Plan your visit to Martres-Tolosane, Haute-Garonne

The French version of this page is at Martres-Tolosane (Francais)