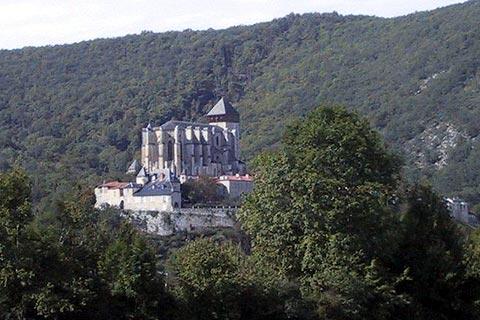 Saint-Bertrand-de-Comminges is one of the 'most beautiful villages of France', situated on a small hill 50 kilometres south-east of Tarbes in the Pyrenees. The village is in a lovely sleepy location, surrounded by the lush green valleys of the region and overlooked by the Pyrennean foothills.

Built on the site of a Roman city, it was once a large town called Lugdunum Convenarum, where Pompeii ruled over 10,000 inhabitants. Things have changed slightly and the village now has about 250 inhabitants!

While it is the cathedral (see below) that dominates the village, there are also several other interesting sights in Saint-Bertrand-de-Comminges that date back to the Roman era and a medieval village centre. You enter the village through one of the medieval entrances through the ramparts: three of these entrances are still in existence, as are a substantial part of the fortified walls. 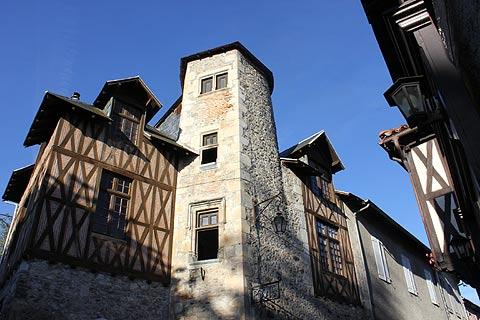 Inside the walls the streets of the town contain a good number of medieval and half-timbered houses, reminding us that in the 15th century Saint-Bertrand-de-Comminges was again an important regional centre and pilgrimage centre.

Among other interesting buildings in the centre of the village you can see some very traditional colombage houses and barns of the region, with their impressive carpentry work clearly visible. Among the best examples, the house that is now the post office is a splendid 15th century town house known as Maison Bridaut with a colombage facade and a hexagonal stone tower.

Also facing the same square as the cathedral is a small chapel, and an information centre called Olivetains which features various exhibitions, including some interesting artefacts from the region - the highlight is a 6th century stone altar table.

If you follow a little way down the hill from the Maison Bridaut and exit the village through another gateway through the fortifications (Porte Gabriel) you can see some attractive views across the countryside.

You will find one or two cafes and small shops but otherwise facilities are quite limited. In the village during the summer there are various art exhibitions and 'medieval days' are also held on occasion in Saint-Bertrand-de-Comminges.

The Cathedral of Saint-Mary overlooks and overshadows the quiet centre of the village. Built on the crossroads of several important trade routes and overlooking the valley of the Garonne the cathedral at Saint-Bertrand-de-Comminges is often referred to as the 'Cathedral of the Pyrenees'.

Not exactly understated, it looks as much like a fortress as a cathedral, an effect that is heightened by the slope leading up to the cathedral entrance.

The highlights in the cathedral include the belltower, the cloisters (one of the oldest parts of the cathedral, and with many ornate carvings of flowers to admire), the entrance gate and renaissance period stained glass windows, and the tomb of Saint Bertrand with numerous medieval paintings.

The tomb and the the carvings in the choir which occupy the central part of the cathedral are an incredible show of workmanship by the best Toulouse craftsmen in the early 16th century.

Note: to access the cathedral cloisters, treasury, garden and to see the carved stalls a small admission charge is payable.

To the left of the cathedral you can follow the 'chemin des terrasses' which also has far-reaching views.

Enthusiasts of roman architecture will want to visit the basilica of Saint-Just de Valcabrère. In an attractive setting just outside the village and dating from the 12th century the church has a particularly lovely entrance with statues of the saints Matthew, Mark, Luke and John.

There are some excavated remains of the original Roman city to see, including the sites of the original temple, theatre, baths and forum, on the plains below the village, along with the foundations of a very early (5th century) church. Also to visit, further evidence of the importance of the region to the Ancient Romans can be seen at the roman villa at Montmaurin.

Map of Saint-Bertrand-de-Comminges and places nearby

Visit near Saint-Bertrand-de-Comminges with France This Way reviews

Plan your visit to Saint-Bertrand-de-Comminges, Haute-Garonne