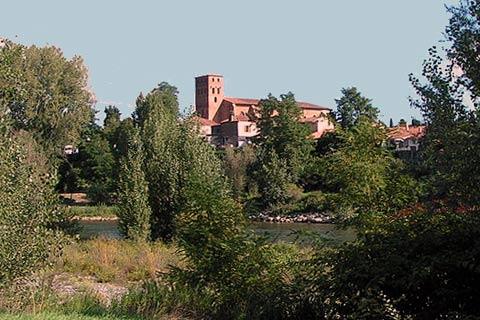 Carbonne is a small town in the Haute-Garonne department of the Midi-Pyrenees, about 40 kilometres south of Toulouse. It is situated is on the Garonne river, at its confluence with the Arize river. Dating from the middle of the 12th century, the village was built in an attractive location on a bend in the river.

Carbonne is an attractive small town, with some of the buildings constructed in the typical style of the region using thin red bricks and white stone, although little remains of the original village: suffering from the same fate as many villages in the south-west of France in the 13th century, the original village at Carbonne was ransacked by Simon de Montfort in 1244 as part of the crusade against the cathars. 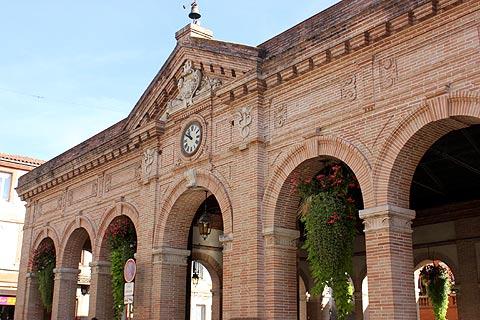 It was 12 years later that people returned when one of the first bastides was constructed here. The Black Prince and the Hundred Years war came next, and again the village was more or less destroyed. After 1356, the monks who had originally established Carbonne resettled, and a new, fortified, bastide town was constructed a little to the north of the original village.

France This Way comment: Carbonne is a pleasant town, but the sites of interest are quite minor and the town will not take you long to explore.

The 19th century market hall, in the center of the town on the main shopping street, is of interest. An attractive structure built in red brick the market hall uses ironwork instead of wood for its roof structure, a trend that was fashionable in 19th century France and inspired by similar structures in Paris designed by Gustave Eiffel.

There are also three interesting historical towers in Carbonne including the Tower of the Governor's House and the Colombier de Grilhon, both dating from the 16th century and octagonal in shape with decorative roofs (a colombier is a tower historically used for raising pigeons).

The 13th century Church of Saint Laurent is on the edge of Carbonne, having been built as part of the original bastide town here. The church has an impressive gilded altarpiece and a baroque style choir section.

Close to the church don't miss the Abbal Museum and gardens which has some interesting sculptures by André Abbal, a sculptor from the village who was active in the early 20th century. Open every day except Tuesday from June to September but only Saturday and Sunday afternoons from October to May, and closed 15 december to end January. Admission price 3.50 euros.

Because of this historical association with Abbal, Carbonne now has a reputation as a village that attracts various artists and artisans.

The stone bridge over the river, constructed in the late 18th century, has nice views across the town and along the river banks. 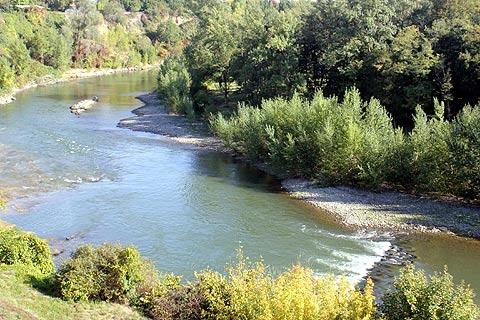 The village of Rieux-Volvestre is a pretty village that merits exploration a few kilometres south-west of Carbonne. Otherwise most of the important attractions in this region are either a sigificant distance to the north of Carbonne e.g. Toulouse, or in the mountains a reasonable journey south of here.

Map of Carbonne and places nearby

Visit near Carbonne with France This Way reviews

Plan your visit to Carbonne, Haute-Garonne

Regular market(s) are held in Carbonne each Thursday. (Markets are held in the morning unless stated.)

The French version of this page is at Carbonne (Francais)