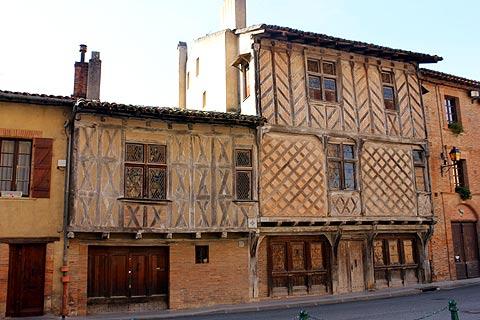 The town of Rieux-Volvestre, to the south-west of Toulouse, is a very scenic small town in a picturesque setting and with several buildings of interest to discover. The centre of the town is largely built in the small red bricks typical of the region round Toulouse, adding to its charm.

France This Way comment: Rieux-Volvestre is quite a small village that is quick to explore but is in a picturesque setting and includes several attractive buildings and a visit is recommended.

There is a car park at the end of the Pont Lajous, ideally situated as a starting point to explore the highlights in the town. There is a cemetery at the northern end of the bridge, in a position where a castle once stood, and also from this end of the 17th century bridge there are attractive views along the river Arize and the cathedral. 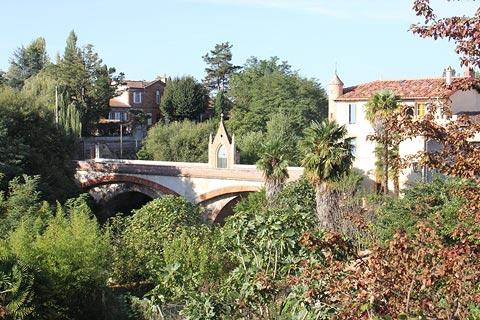 The main cluster of important buildings in the village is found at the other end of this bridge, as is the Rieux-Volvestre tourist office.

As you enter the square you will see an imposing colombage house on your left, which was once home to several of the bishops of the town. Next to this house is the 'ancien seminaire', now home to the Town hall and dating from the 15th century. Part of this building now contains a small local museum with several artefacts of interest.

On the other side of the same square is the Cathedral of Saint-Mary. The cathedral was built in the 14th century on the site of an earlier chapel, of which a small part of the walls can still be seen. The arched entrance and the octagonal tower are the main features of interest of the cathedral - the lower part of the tower dates from the 14th century while the ornate upper three stories with gargoyles and open arches were added in the 17th century.

Adjacent to the cathedral you can see the Evêche and the Valtan Tower, also from the 15th century (now in use as a medical centre).

Following along Rue de l'Ort (opposite the Evêche) you reach the convent and park of the Jacobins, dating from the 16th century and at one time the dormitory for the convent. Along the way you pass some other colombage houses.

From the far end of the park take the lane called Courtiou for views across to the second bridge in Rieux-Volvestre, the Pont d'Auriac, with the small Chapel Notre Dame on the bridge  featuring some frescoes.

Returning to the town centre along Rue d'Auriac you will see the 15th century market hall, and a house in the same square built in the 17th century featuring several busts representing Venus, Jupiter, Mercury, Poseidon, Saturn and Bacchus. From here you can turn left and return to your starting point in Rieux-Volvestre. 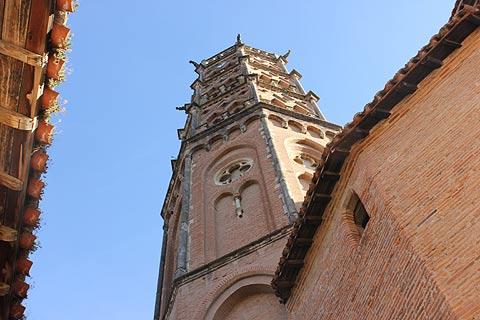 Most visitors will find themselves in Rieux-Volvestre as a pause on the journey from Toulouse, the very beautiful city to the north-east of here, towards the Pyrenees to the south.

Map of Rieux-Volvestre and places nearby

Visit near Rieux-Volvestre with France This Way reviews

Plan your visit to Rieux-Volvestre, Haute-Garonne

The French version of this page is at Rieux-Volvestre (Francais)