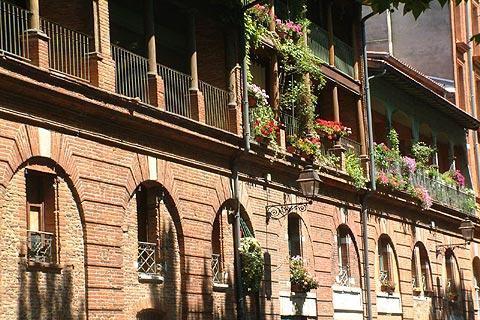 Haute-Garonne has a great deal of interest to visitors, from the beautiful red-brick architecture of Toulouse to the dramatic scenery of the high Pyrenees - truly something for everyone!

The Haute-Garonne department is in the Midi-Pyrenees region of southern France. The department covers diverse landscapes, from the undulating and hilly regions to the north and the border with Gascony, to the mountainous Pyrenees and the Spanish border to the south, and with the UNESCO listed Canal du Midi passing through the heart of the Haute-Garonne.

A substantial part of the southern department is covered in forests, and it is the natural landscapes that are the main attraction to visitors, with ample opportunities to enjoy exploring the environment, from hiking in the summer to skiing in the Pyrenees in winter.

The most visited regions here are Toulouse itself in the north, and the countryside in the southern half of the Haute-Garonne.

The capital of the region, the very attractive and interesting red-brick town of Toulouse, is found to the north of the Haute-Garonne

While visiting Toulouse you will enjoy a visit to the Cite de l'Espace, a popular attraction on the edge of the city based around the theme of space travel, including a 'real' rocket - a fitting tribute to the importance of Toulouse in France's important space industry.

An interesting town to the north-west of Toulouse is Grenade, which has several interesting monuments and a riverside walk.

If you enjoy visiting traditional medieval French towns you might also enjoy a trip east to Revel (near the border with the Aude department), a pleasant excursion through the countryside and a chance to see a very large medieval market hall. Visit the nearby bastide town of Saint-Felix-Lauragais while you are here in the east.

To the south of Toulouse we enjoyed a stroll around the red-brick village at Clermont le Fort, then a little further south-west two bastide towns that deserve a mention in the Haute-Garonne are Carbonne and Cazeres.

More interesting and picturesque than these two market towns is the village of Rieux-Volvestre (halfway between Carbonne and Cazeres), while other local possibilities include a visit to Saint-Sulpice-sur-Lèze, and a visit to Auterive to see the Church of Saint Paul and take a stroll around the old town.

To the west of here the village of Palaminy, the bastide town at Martres-Tolosane and the village at Alan are also each pleasant to explore.

Time permitting you might like to explore the cluster of villages to the south of Rieux-Volvestre, several of which have their own particular charm, such as Montesquieu Volvestre; the quaint church and market hall at the centre of Montbrun Bocage; and the small historic centre of Saint-Christaud

Approaching the more mountainous south you should first visit Saint Bertrand de Comminges, classified among the 'most beautiful villages in France' in this southern section of Haute-Garonne and the very lovely roman style church at nearby Valcabrere.

The important remains of the Roman villa at Montmaurin are also in the Comminges region of Haute-Garonne and are now a listed National Monument open to the public. The villages at Saint-Pé d'Ardet and Saint-Béat are nearby - visit the former to see the church and frescoes and the latter for a stroll along the riverside in the village.

Hikers will find that Hospice de France is a good starting point for many hikes in the Pyrenees near Bagneres. The well known GR10 long distance footpath that crosses the pyrenees from coast to coast also passes across this region of the Haute-Garonne.

Map of Haute-Garonne and places nearby