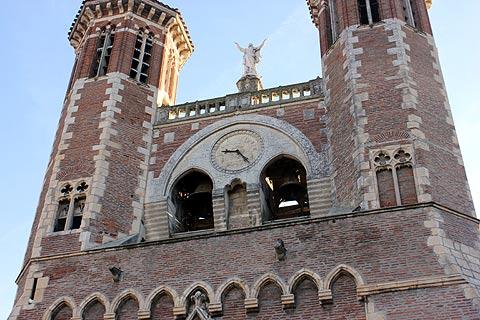 Cazeres is situated in the Haute-Garonne department of the Midi-Pyrenees, on an attractive stretch of the Garonne River about 60 kilometres south of Toulouse. The origins of the town are not clear, although it is apparently probable that there was a Roman settlement at this point. By the 12th-13th century the town was well established, based around commerce carried out on the river.

France This Way comment: while Cazeres has two or three interesting buildings it is also rather run down in places, and not a 'tourist town'. While it is unlikely to act as a base for your visit to the region a detour might be of interest if you are passing. 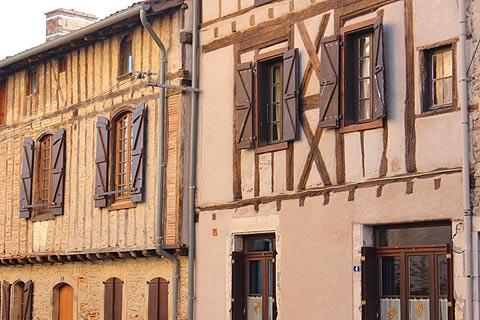 The 14th century Church of Notre Dame of the Assumption, the main monument in Cazeres, is a typical bastide style church on the square in the centre of the village, built in the local 'small brick' and has a decorative carved entrance, unusual octagonal towers on either side, and arches behind. The facade also incorporates two bells and a clock.

The church treasury can also be visited and includes various statues and church furnishings of interest and also the 14th century baptistery: to visit the church and treasury see the Cazeres tourist office.

Another interesting religious monument is the chapel and cloisters des Capucins on Rue des Capucins and now used as part of a complex that includes a cinema.

There are also a few other interesting houses to admire in Cazeres,such as the mairie (on the same square as the church, and with stone arches at ground level) and the occasional house with exposed colombage: the Case de Montserrat on Rue de la Case is one of these and is now the Cazeres Tourist Office.

A bridge across the river provides pretty views while other small highlights include a 16th century washhouse and a nicely maintained park and cloister with gardens (contributing to the town's 'ville fleurie' award).

It is also possible to walk along the riverside to better admire the village and surroundings - the view from the other side of the river looking back across to the town and the church that dominates the skyline is particularly impressive.

The weekly market in Cazeres is held on a Saturday.

If you are staying close by you might like to also visit Cazeres at night, when the bridge and lots of the buildings are carefully lit, giving a totally different aspect to the town. 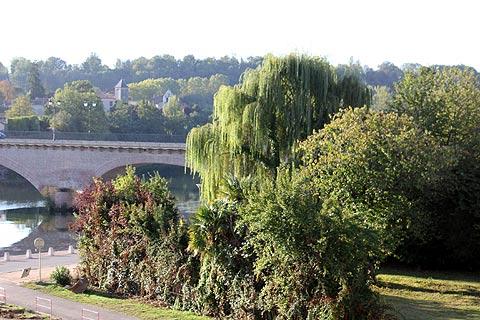 We enjoyed visiting the villages of Rieux-Volvestre to the north-east of Cazères, and Saint-Lizier in the Regional Natural Park of the Pyrenees-Ariegoises to the south of the town.

Map of Cazeres and places nearby

Visit near Cazeres with France This Way reviews

Plan your visit to Cazeres, Haute-Garonne

Regular market(s) are held in Cazeres each Saturday. (Markets are held in the morning unless stated.)

The French version of this page is at Cazeres (Francais)