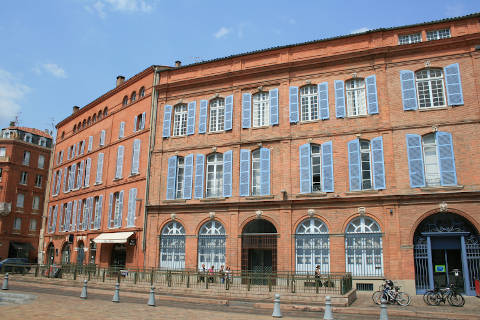 Toulouse is a very interesting city, in the south of France and in the Midi-Pyrenees region. It is the 4th largest city in France and succeeds very well at combining the attractive old centre of the city with modern success in industry, together creating a bustling and lively city.

France This Way comment: there is a great deal of interest to explore and discover in Toulouse, and here we discuss a few of the highlights. However, describing the individual monuments fails to capture the essence of the city - the cafes and restaurants, the small shady squares you discover...the small things that combine to make Toulouse so fascinating and interesting.

Start your visit to Toulouse in the central Place du Capitole, a large open square in the heart of the city (with convenient parking underneath the square). The grand building with eight columns on one side of the square, in the characteristic pink brick of the town, is the Capitole du Toulouse, the head of local government and dating from 1750. 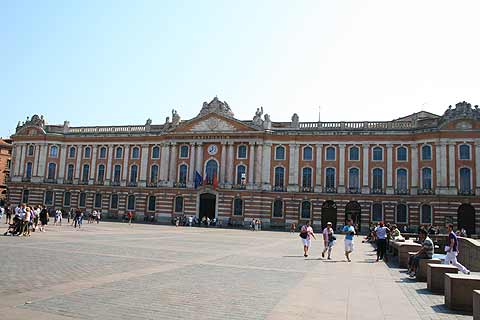 The buildings of the Place du Capitole date for the most part from the 18th century. As well as the town hall there is the opera on one side and the Place du Capitole and on the other side (through the arch) is a 16th century donjon (dungeon) which is now the building of the Toulouse tourist office. There are several cafes around the square, making it the centre of activity in the city centre.

The 'trademark' of Toulouse is perhaps the small pretty pink bricks with which many of the houses and important buildings have been constructed, which seem to change colour as the day (and the sun) passes. Hence the city is often referred to as the Ville Rose (pink city). These bricks are also often combined with the local white stone to create a decorative effect.

From the Place du Capitole, head towards the Garonne river, passing through 'old Toulouse' where grand houses line the streets. Toulouse has a number of particularly fine houses worth seeing, including:

The Garonne river passes through Toulouse, and the river banks are often tree lined and a pleasant opportunity to amble in peace, and escape from the bustle of the city. The river banks are lined with impressive houses, again mostly dating from the 18th century: look out particularly for the Eglise Notre-Dame de la Daurade and the neighbouring School of Fine Arts Building.

Across the Garonne river from here is the Hotel-Dieu Saint-Jacques.You can cross the river on the impressive 16th century arched pont-neuf (translation: 'new bridge' although it is now far from being new)  impressively, even this bridge manages to incorporate some of the local pink brick!

When you have crossed the Pont Neuf you will see a lovely old 19th century water tower which is now home to an art gallery which is dedicated to photography by famous and up and coming artists. It is an excellent gallery. I first visited the gallery nearly 30 years ago and bought a collection of black and white prints which I still have on my wall today. The same style of prints are still sold at the gallery for a very reasonable 3-4 euros each. 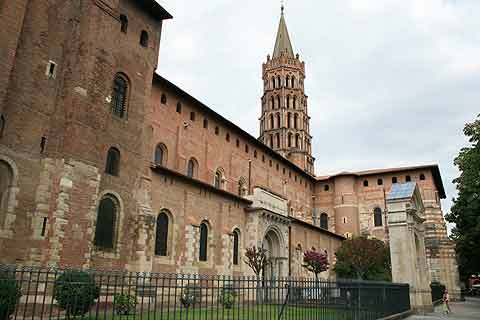 Saint-Sernin church, a substantial 11th century roman style church, is perhaps best known for its tower, with five octagonal levels each pierced by ornate arches, and is one of the finest buildings in Toulouse as well as being the largest roman style church in the world. This church, along with the Hotel-Dieu Saint-Jacques, also form part of a UNESCO world heritage site, being on the pilgrim route to Santiago de Compostella.

The Convent of Les Jacobins is an excellent example of gothic architecture from the 13th and 14th centuries and has a wonderful cloister, used for concerts throughout the summer months.

Toulouse's Cathedral of Saint-Etienne is unusual as it is a kind of amalgam of two churches, incorporating two different styles of gothic architecture. One dates from 1230 and the other was started on a different axis in 1272 but this was later abandoned. Later reconstructions have also taken place and the cathedral facade is now most unusual, with a white stone arched facade and rose window 'inset' in a later, larger red brick facade.

If you like museums - well, Toulouse has plenty! From fine arts to modern art, from antiques to natural history, you are sure to find the museum that covers your interest. 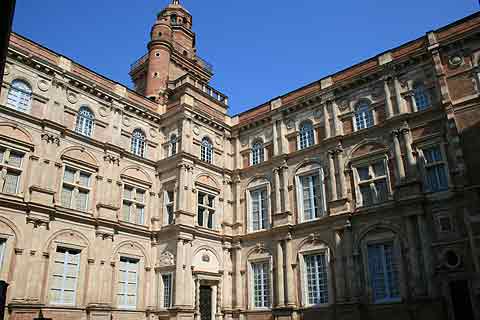 The large botanical gardens (Jardin des Plantes) in Toulouse are a very spacious and carefully planted garden to the south of the city.

The modern wealth and success of Toulouse is based largely on the aerospace industry, with several important companies established in the region and bringing a significant level of prosperity to the town. As a result, one very popular attraction on the edge of Toulouse is the Cité de l'Espace, which combines modern 3D cinema 'space' experiences and children's leaning experiences with a hands-on chance to see and touch some genuine examples of spacecraft.

Map of Toulouse and places nearby

Visit near Toulouse with France This Way reviews

Plan your visit to Toulouse, Haute-Garonne

Regular market(s) are held in Toulouse each Wednesday all day & Tuesday & Thursday & Sunday & Saturday & Friday. (Markets are held in the morning unless stated.)

The French version of this page is at Toulouse (Francais)