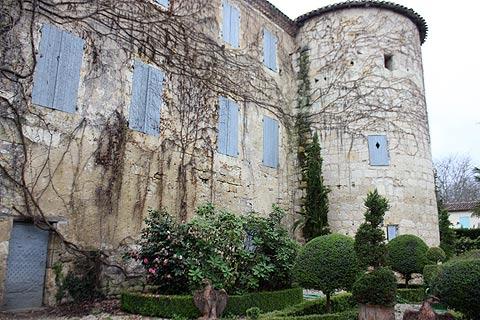 Saint-Antoine is a small village in the Gers department. It is close to Valence d'Agen and Moissac, and is is an attractive village above all known for its ancient hospital, the Ancien Hospice des Antonins.

The village of Saint-Antoine is entered through a stone gateway in a large square tower which links the attractive building of the ancient hospital to the houses at the other side. 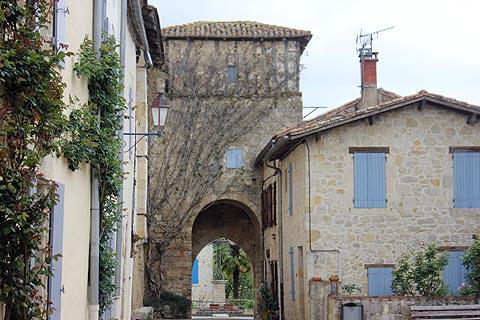 The 'Ancien Hospice des Antonins', was once a hospital run by the 'ordre hospitalier of the Antonins' and operated for hundreds of years before being closed when the pope closed the Antonin order of monks in 1776 and seized all their assets. It is a beautiful building, built in pale golden stone with a large round tower at one end and the square entrance tower at the other.

Passing through the stone gateway the village largely runs down one street with charming stone and half-timber buildings along its length.

On this street you can see the church, with a very simple stone facade enlivened by the stonework and columns around the entrance. Inside the church still has much of the paintwork that originally covered many churches in France but which has long since disappeared in most. In Saint-Antoine's church the main colour is pink and the pattern is such that it almost feels like walking into an old-fashioned lounge rather than a church.

On one wall there is a lovely fresco that is in the process of being restored. The church also has an unusual reliquary in the form of a hand.

Also on this main street is a small cafe giving you the chance to pause for refreshments and admire the surroundings.

Saint-Antoine is on one of the French routes of the Santiago-de-Compostella pilgrimage between Auvillar and Flamarens and there is a gite d'etape in the village if you are needing a bed for the night. 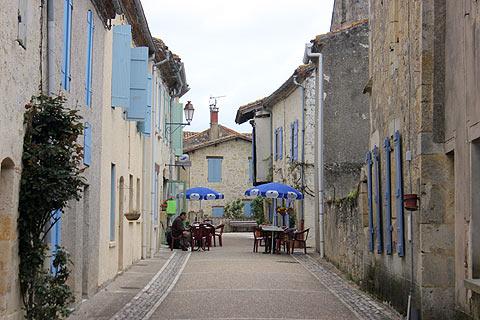 Close to Saint-Antoine, Auvillar is one of the classified "most beautiful villages of France" and certainly not to be missed given that it is just a few kilometers away.

Moissac with its famous cloisters is close by. The attractive towns of Lectoure and Fleurance both also merit a visit.

Map of Saint-Antoine and places nearby

Visit near Saint-Antoine with France This Way reviews

Plan your visit to Saint-Antoine, Gers

The French version of this page is at Saint-Antoine (Francais)